@dancathy[1] just called me. #ChickFilA[2] has already set a world record today, with 7 more hrs to go in the West. #OutOfChicken[3]

We are very much supportive of the family – the biblical definition of the family unit. We are a family-owned business, a family-led business, and we are married to our first wives. We give God thanks for that. We operate as a family business … our restaurants are typically led by families; some are single. We want to do anything we possibly can to strengthen families. We are very much committed to that, Cathy emphasized. We intend to stay the course. We know that it might not be popular with everyone, but thank the Lord, we live in a country where we can share our values and operate on biblical principles. – Dan Cathy, Chick-fil-A’s president and chief operating officer

You have to give Mike Huckabee credit. He was the guy promoting a Chick-fil-A Appreciation Day and it succeeded beyond anyone’s wildest dreams.

Courtesy of the Washington Examiner[5], just look at the lines. 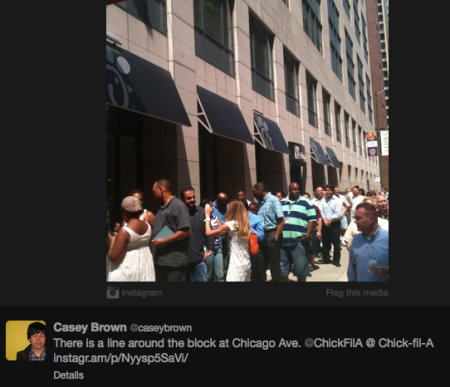 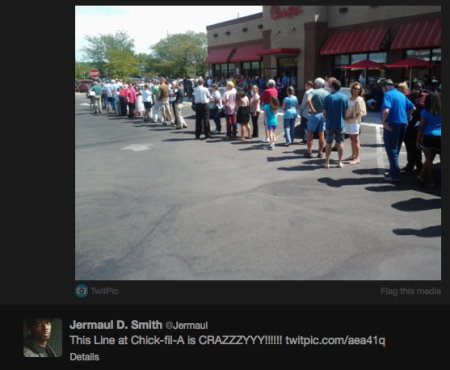 Despite the fact that I haven’t eaten any fried or fast food in a few months, I decided I needed to do my part to support Chick-Fil-A. So, I headed out to get a sandwich. Besides, I was genuinely curious to see if here, in little Myrtle Beach, people were turning out for Chick-Fil-A the way they were everywhere else.

As it turns out — they were. The line to get into the drive thru started outside of the Chick-Fil-A parking lot and went once around BEFORE you could even get in line. There was also a line out the door. 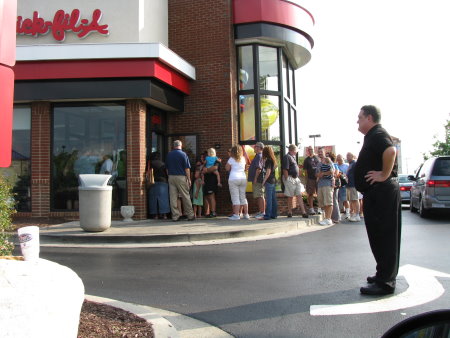 The total time it took to get a delicious Chick-Fil-A sandwich?

During that whole time, I only noticed a couple of people who turned around because they seemed to be intimidated by the line and I couldn’t help but notice that the Arby’s right next door was only half full. while I was waiting, I spoke to a manager who was in the parking lot directing traffic. He told me that they had expected a big day, but didn’t have any idea it would be huge. He also said it had been this busy since 9 AM.

In the end, was it all worth it to get that delicious sandwich back home to my dining room table? 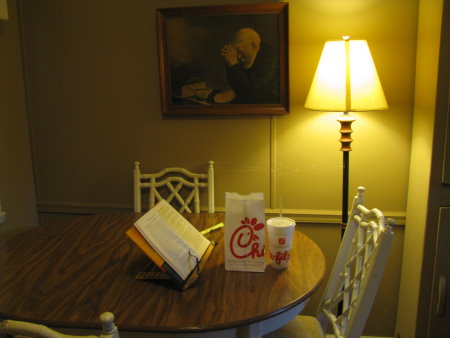 PS #1: The publicity and new customers Chick-Fil-A received yesterday will do it 50 times more good than the pathetic boycott the Left is organizing against it can hurt. So, liberals and the Muppets can rattle their sabers as much as they like, but Chick-Fil-A has already won.

PS #2: If I were the Democrats, I’d be sweating twice as much as I was before Chick-fil-A Appreciation Day because this wasn’t all about chicken, my friend. It was about Christians and conservatives in this country who’re tired of being shoved around. If people will turn out like this all across the country to get a little chicken and send a little message, just imagine what it’s going to be like in November. Barack Obama is doomed.