This is fantastic! It’s the perfect message for the New Year, embodying Christianity, God and the First Amendment. Man, I can’t wait to see Liberals in Times Square go ballistic over this. It will infuriate them. Good times. As the ball drops, Leftists will have their blood pressure rise in response to a giant cross displayed thanking God for freedom. Just as we should. The group Answers In Genesis rocks the country and tells them to turn to God. I likee.[1] 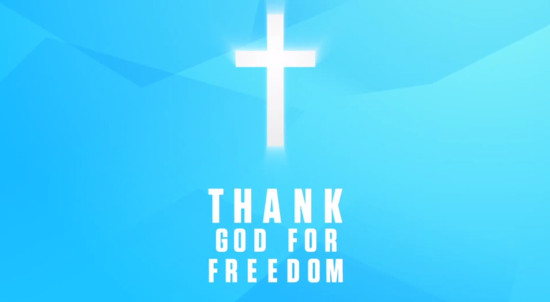 2015 is only a couple of days away, and as always the eyes of the world will be on New York City watching the famous ball drop.

Commercials and billboard space during this time are some of the highly priced and sought after ad spaces of the year, but if your pockets are deep enough you can reach tens of millions of people.

This is just what the group, Answers In Genesis, is doing. They purchased prime billboard real estate to run an ad that says, “THANK GOD FOR FREEDOM.”

They released a statement saying,

“The :15 digital board will remind Americans of the religious freedoms they enjoy – whether they hold to the worldviews of Christianity, atheism, Judaism [or] other belief systems – and must be defended…In addition, the Cross of Christ will be prominently displayed.”

It’s sure to offend people, but Answers In Genesis really doesn’t care. And we really like that attitude.

As we usher in 2015 and the New Year, Christian Conservatives begin the fight of our lives to save our country, our Constitution and our way of life. We will not be cowed and defeated by radicals, Jihadists, Communists, Progressives and Leftists. This in your face ad on New Year’s is the first volley in the battle to truly save America. It is so appropriate that we honor God in our first shout out of the year. As the Black Robe Regiment and Conservatives march onward, we proudly cling to our Bibles and guns. An ad in Times Square – expensive. Smacking the backs of Liberal’s heads with it – priceless.