College Atheists Give Up Club: ‘What’s the Point?’ 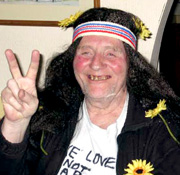 Denitown, Connecticut — Chip McKeown, president of the Atheist club at Connecticut’s College of Regional Accountant Practitioners (CRAP), has announced that the club will be disbanding at the close of this semester.

Professor Freewind Pulcinski (pictured) expressed his disappointment with the move. “It was, like, totally, you, know, juss… like bummed. Ya know, man?,” the professor told reporters on Monday.

The four members of the club all agreed to disband early last week. Said McKeown, “We kept getting together and asking each other what we were there to discuss. But every time the answer was the same: ‘Nothing.'” McKeown went on:

I mean, what’s the point of getting together not to believe? You know, we can do that back in our dorm rooms, right? Who needs rules and schedules, and meetings to talk about nothing? Like, what’s the point, ya know?”

Last year, 2nd year member Dawn Nada suggested that the club could get together to talk about what they would be doing if there was a God, but that seemed to close to accepting that there might be a God, so members voted that idea down.

“I was just trying to get past this whole problem of having nothing to talk about because we didn’t believe in anything,” Nada said Wednesday from her job at Starbucks.

The CRAP atheist club started two semesters ago after the CRAP anarchist club fell apart over disagreement on club rules. McKeown announced the exploratory phase of organizing a new club, the College Fatalists. An announcement was going to take place next week, but organizers are finding a lack of energy to attend organizing meetings. McKeown said that the executive council of the Fatalists club are having a hard time getting out of bed these days.