Every day is Halloween in North Carolina these days it would seem – replete with Satanism, ritual killings and cannibalism. A tattooed Pazuzu Illah Algarad (named after the demon in the Exorcist) and his wife, Amber Nicole Burch, have been charged with two homicides from 2009. They buried them in their backyard after dining on them and burning the young men. Wanna bet there are more? Smiling, devil-worshipping cannibals – what’s to wonder[1]? 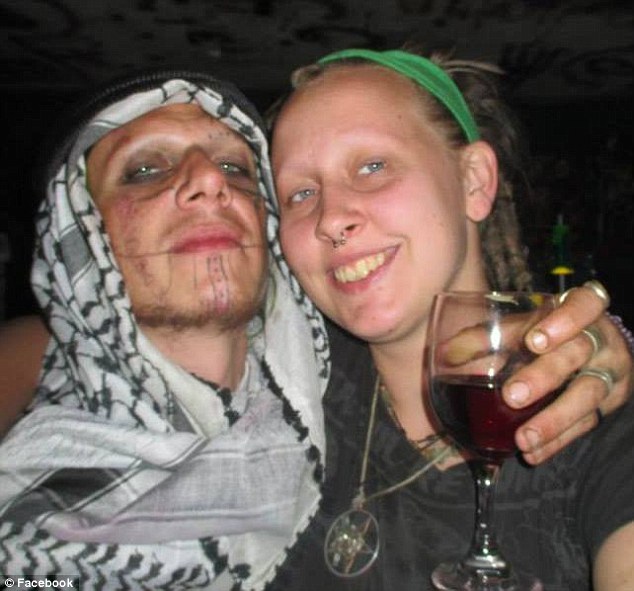 Algarad and Burch shared a home in Clemmons, North Carolina, where animal sacrifices and animal rituals were performed, according to neighbors.

Three people have been arrested after the skeletal remains of two men were found in a backyard of a home owned by Satanists in a North Carolina village.

Pazuzu Illah Algarad, 35, was arrested and charged with murder last Sunday after the two bodies were discovered in shallow graves at the house in Clemmons where neighbors say he has performed animal sacrifices and satanic rituals.

A friend claims that he had ‘told everyone’ about the bodies, but nobody believed him, and he described how he killed them, ate part of them and then burned the rest in a fire pit.

Amber Nicole Burch, 24, who lives with Algarad and is described as his wife on Facebook, was also charged with murder, while 28-year-old Krystal Nicole Matlock has been charged as an accessory with police alleging that she helped bury the bodies.

Police have said they also found animal bones in the property and that more arrests as part of the investigation are possible.

This evil Satanist is not only covered in tattoos, he has split his tongue and filed his teeth. What a model citizen! Hopefully, Algarad and his deranged bride will get the death penalty before they kill and munch on someone else. Mommy dearest is also a Satanist, as I am sure all their buds are. North Carolina needs an exorcism and a hanging judge.