This is absolutely shameful.[1] Obama’s welcoming committee for the Pope includes transgender activists, a gay Episcopal bishop and an abortion-loving, activist nun. I’m surprised Obama didn’t invite the Church of Satan from Detroit and have a bunch of ISIS members on tap. I’m no fan of this Pope. I consider him a Marxist. But this is truly a slap in the face of the Catholic Church. It’s blasphemous and an insult. The Vatican is none-too-happy about all this. Evidently, it came as a surprise to them. It doesn’t to me. I would expect nothing less from the likes of Barack Obama. 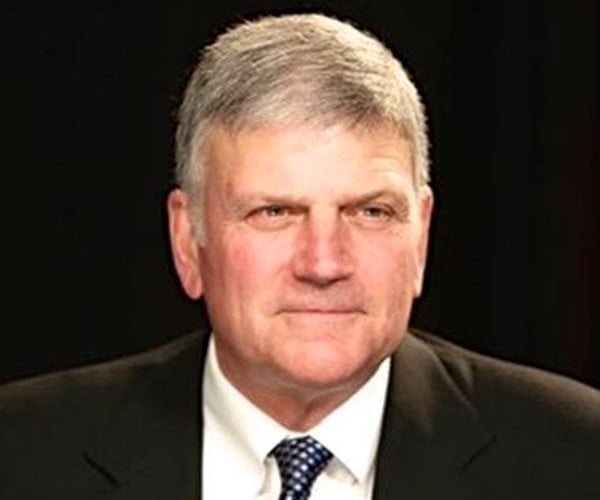 “Is there no end to the lengths the president will go to in order to push his sinful agenda?” said Graham, who shared a link from The Wall Street Journal[4] about the president’s plans.

“It’s wise of the Vatican to question President Obama’s guest list for the Pope’s visit next week,” Graham said. The guests[5] are transgender activists Mateo Williamson and Vivian Taylor, the first openly gay Episcopal bishop, Bishop Gene Robinson and Sister Simone Campbell, an activist nun who leads a group criticized by the Vatican for its silence on abortion and euthanasia. 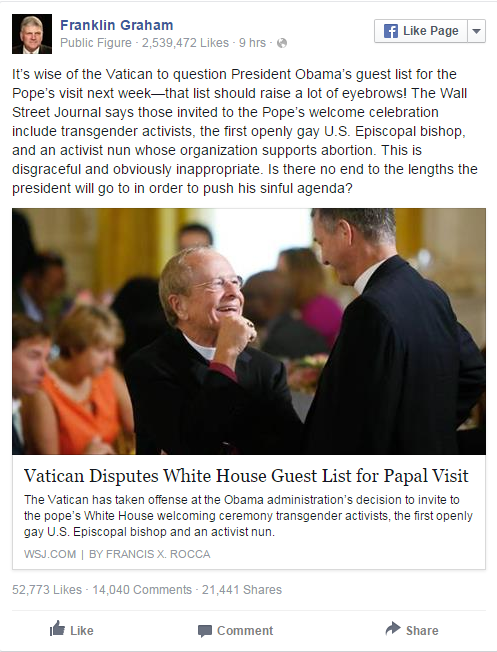 Rush Limbaugh[7] has also slammed Obama for inviting the group to meet the pope, pointing out that “Some people are saying that this is perfectly Obama. He’s got the Pope coming, and he wants to insult the Pope, put pressure on the Pope, and challenge the Pope.”

Even The Washington Post[8] questioned Obama’s guest list, pointing out that it shows that the White House is showing less respect for Pope Francis than foreign dictators.

White House Press Secretary Josh Earnest noted that “there will be 15,000 other people there too: at the White House’s South Lawn on Wednesday.

The Vatican has said it is concerned that any photos of Pope Francis posing with the controversial guests could be misconstrued that he endorses their activities, which are against church doctrine.

Pope Francis just arrived for a 10-day trip to Cuba and the United States. By all accounts, he will be showing solidarity with the communist regime and then declaring his loyalty to Hispanics… especially illegal Hispanics and refugees. Next week, the Pope will speak in front of Congress. He will push his climate change encyclical. He will promote open borders and rail on the evils of capitalism. He will inform Americans that Christian charity comes before our Bill of Rights and the Constitution. What he wants is for Americans to submit to global elitists who are Marxists. That’s not going to happen. I will be listening closely to his speech, but I pretty much already know what it will entail. We dare not listen to soft, seductive religious cooing, while pushing for tyrannical agendas. Pope Francis will define himself this week for all to see.