A Driver Shouted ‘Allahu Akbar’ While Running Down City Pedestrians in a Half-Hour Spree, Injuring 11

Nothing to see here… just another lone wolf crazy or so they would have you believe. In reality, it is par for the course for the Religion of Pieces and is more holy Jihad against the infidels in their ongoing quest to conquer the world for Allah. Authorities would have you believe all Jihadists are crazy, but only when they kill people. They are religious zealots with a political agenda. Killing is part of their outreach efforts, so-to-speak. Thank goodness no one died in this attack and the only casualty in another attack was a terrorist with a knife who attacked three police officers. That one was in the name of ISIS specifically. The soldiers of Allah keep up their murder sprees in their war against civilization.[1] 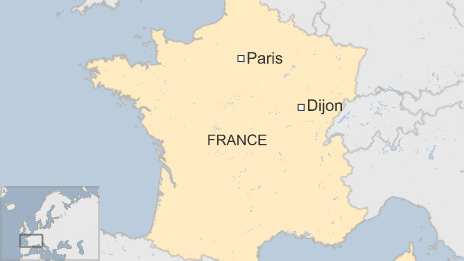 A driver shouted “Allahu Akbar” (“God is the greatest”) while running down pedestrians in Dijon, France, Reuters reported[3].

The man injured 11 people Sunday, two seriously, during a 30-minute spree in which he targeted pedestrians in five different parts of the city, the BBC reported[4], citing French media. The lives of the two people seriously injured are reportedly not in danger.

Witnesses said the driver, about 40, also indicated he was “acting for the children of Palestine”, an unnamed source close to the investigation told AFP news agency. He was arrested and is “apparently imbalanced,” having spent time in a psychiatric hospital.

A spokesman for the interior ministry told French TV he believed the attacker, known to law enforcement for minor incidents over the last two decades, acted alone.

It was the second incident of its kind this weekend. On Saturday French police fatally shot a man in Tours after he attacked them with a knife while shouting “God is great,” the BBC noted. The man injured three officers before he was taken down. As with the Dijon incident, the man was characterized as ”very unstable” by Interior Minister Bernard Cazeneuve, the BBC said.

More from the BBC:

France has the largest number of Muslims in western Europe — estimated at between five and six million.

There have been a number of “lone wolf” attacks by Islamists in recent years:

• Last year, a convert to Islam stabbed a soldier in Paris[5].

• The main suspect in the murder of four people at a Belgian museum[6] this year is a French-born man who spent a year fighting in Syria.

• In 2012, Mohammed Merah shot dead seven people[7] in the city of Toulouse before being killed himself in a police siege.

How many people have to be hurt, scarred for life, tortured or die before we recognize our enemy? You see these attacks all across the planet, everywhere you go. Islam, ISIS and the Caliphate bring their murderous ways and violence to every corner of the globe in their quest to expand the empire for Allah. This guy hit five different areas and ran over eleven people before he was arrested. Next, he’ll be coddled and put back into another psychiatric institution – then he’ll get out again and try and kill some more people. You can’t fix zealots – they don’t fear death. The infidel’s world is one big video game for them and they just keep racking up Jihad points.