After ISIS marched 21 Coptic Christians to a Libyan beach and then brutally beheaded them, Egypt acted–quite unlike Obama–and launched a series of air strikes on ISIS positions in Libya. 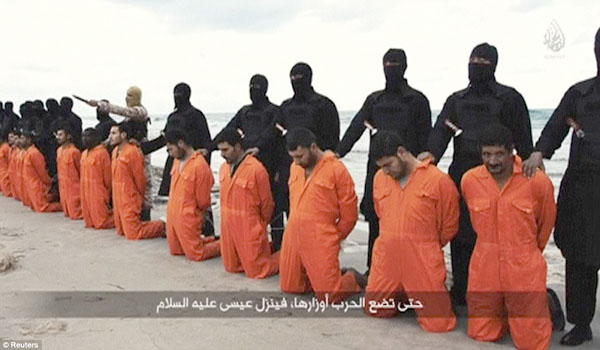 The Egyptian government told their people, “Your armed forces on Monday carried out focused air strikes in Libya against Daesh camps, places of gathering and training, and weapons depots.”

There were at least seven strikes in Derna in the east of the country, which has become a hotbed of Islamic extremism since Libyan dictator Muammar Gaddafi was overthrown in 2011.

It is the first time Egypt has announced military action against Islamist targets in its western neighbour, having previously denied it targeted militants there, and the first time militants connected with the Islamic State terror group have been hit with airstrikes outside Syria and Iraq.

The strikes are in response to a gruesome video, released last night, showing a group of orange jumpsuit-clad Coptic Christians being marched to the shores of the Mediterranean Sea by masked, knife-wielding militants.

The 21 men, who were Egyptian migrant workers kidnapped last month, are then seen being forced onto their knees before they are beheaded simultaneously by the militants standing behind them.