Do You Find This Offensive? North Carolina City Forced to Remove Memorial of Soldier Kneeling at a Cross After a $1Million Lawsuit Claimed it was “Offensive” to Non-Christians

There’s one thing that can unite Americans of all different religions: atheists suck. A perfect example of why everyone hates atheists come from North Carolina, from an atheist veteran who won a one million dollar lawsuit because a memorial featuring a soldier kneeling in front of a cross hurt his poor little feelings. 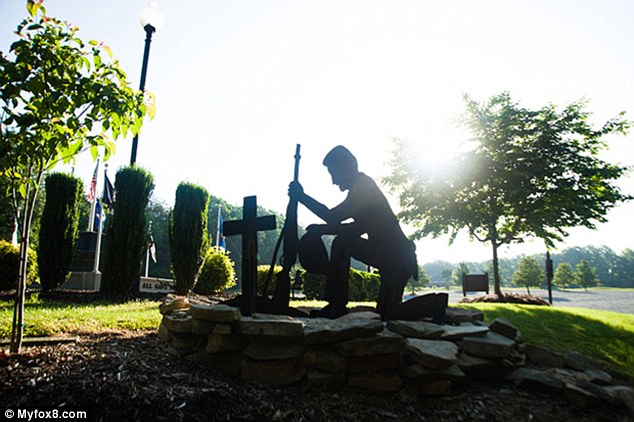 The city of King is settling a lawsuit by removing a Christian flag and statue of soldier kneeling by a cross from the Veteran’s Memorial at King Central Park.

The Winston-Salem Journal reported the city council voted 3-2 Tuesday to approve the settlement. Under the agreement, the city will not fly the Christian flag and will remove the statue depicting a soldier kneeling before a cross-shaped marker.

The city said in a news release that it had incurred more than $50,000 in legal fees and costs.

A U.S. Army veteran sued in November 2012, alleging King officials violated his constitutional rights by allowing the Christian flag to fly at the memorial.

Fox News reports that the memorial was paid for with private donations.

… Hewett said he sued because he felt his constitutional rights were being violated.

He will be paid $1 in damages.

‘I proudly served alongside a diverse group of soldiers with a variety of different religious beliefs,’ he said. ‘The City of King should be honoring everyone who served our country, not using their service as an excuse to promote a single religion.’

However city councilman Wesley Carter felt the city was forced to settle.

‘I feel this city has been sabotaged and bullied by folks who don’t believe in what this community stands for,’ he said.

So of course, in the interest of fairness, Hewett will be using that fat paycheck to build an atheist-friendly memorial, right? Because he couldn’t possibly have just whined and bullied his way into forcing a city to take down a memorial so he could be a millionaire. Right?