GOP Congressman Turns Tables On Atheist: ‘I Thought It Was A Dumb Idea’

Could there be a dumber idea than atheist chaplains[1]? Okay, maybe voting Barack Obama into office a SECOND TIME, but just because the country has done one stupid thing doesn’t mean we need to do another. U.S. Rep. Michael Burgess (R-TX) gets that. 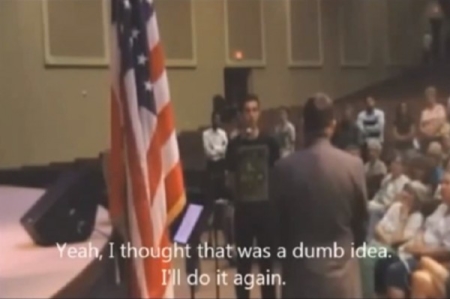 You’d think the question of adding “atheist chaplains” to the military was put to rest by the House of Representatives, which voted against the controversial proposal several few weeks ago, but the secular humanist lobby is continuing to battle.

This time an atheist college student, Daniel Moran, took to the microphone at a town hall meeting Thursday and asked U.S. Rep. Michael Burgess (R-TX) why he twice voted against the measure.

Instead of shrinking from the student’s pointed question, Burgess had this to say: “Yeah, I thought that was a dumb idea. I’ll do it again.”

The audience erupted in applause and hoots and hollers upon hearing Burgess’ response. One man in the crowd shouted, “There are no atheists in foxholes!”

“If you’re going to have a chaplain, you’ve gotta start somewhere,” Burgess replied, “and that starts at the top with a belief in God…every chaplain that I’ve ever had has started at that point.”

The whole idea of atheist chaplains is so self-evidently stupid that only a liberal or a lunatic could come up with it in the first place.