Gun Control Israeli Style: Everyone Encouraged to be Armed & Ready to Eliminate the Enemy

Good for Israel![1] They have sense evidently many Americans don’t. In the last couple of weeks, attacks on Jews in Israel have spiraled out of control. Specifically stabbings and shootings. Education Minister Naftali Bennett encouraged Israelis to carry weapons and be alert. They are to prevent further attacks… in other words, eliminate the enemy. Kill em. That is the perfect advice, I just wish our leaders were this sane and pragmatic. Everyone walking around with guns slung over their shoulders will certainly squash regular crime. As for terrorists, they may still kill, but they will be taken out quickly and many will be saved by this. 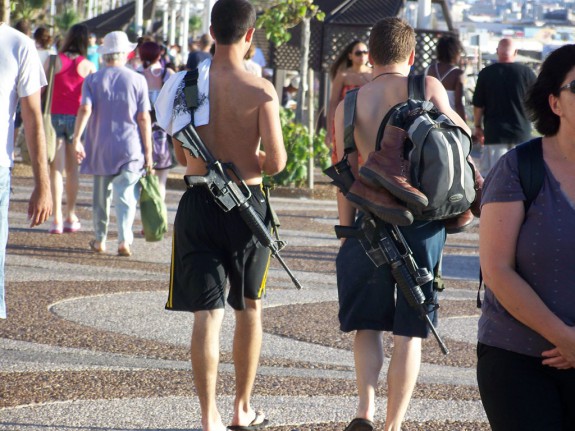 As the number of terrorist attacks continues to grow Israel politicians, on the left and right, are encouraging citizens to carry guns and defeat the Islamist killers.

Civilians who shot terrorists are heroes, politicians on right and left say; Deputy Defense Minister: People with guns should be alert and prevent further attacks.

“Against the cowardly Arab terrorism, a wave of Jewish courage is rising to defeat it,” he said, visiting a protest tent in front of the Prime Minister’s Residence, in which demonstrators called for more action against terrorism. Bennett said that “wherever there is a terrorist, citizens rise to defend their brothers and eliminate the enemy. In the Kirya in Tel Aviv and Kiryat Arba, Petah Tikva and Kiryat Gat, we see great heroism and great friendship.”

“For the past 120 years, people are trying to kill the Jews here. The enemy changes, but we remain here, growing and building our land,” he added.

“We are the eternal nation, and we are raising our heads.

Jewish heroism will defeat the enemy.”

Similarly, Deputy Defense Minister Eli Ben-Dahan, also of Bayit Yehudi, called on any civilians legally carrying a firearm to “be alert and prevent another terrorist attack,” in an interview with Army Radio.

Ben-Dahan also called on the attorney-general to authorize the army to demolish terrorists’ houses immediately after they attack and not wait a year.

Enough of killing God’s chosen people. They are brave and are willing to fight their enemies. A lot more terrorism is coming thanks to the actions of Barack Obama and others on the world stage. Israel has a right to defend herself. Ben-Dahan is also right – demolish the homes of terrorists immediately. It’s like rubbing a puppy’s nose in their business – make it relevant and make it hurt. Any civilians who shoot these terrorist scum are indeed heroes. The Jihadists are cowards and deserve to be taken out. No big loss. Bennett said that “wherever there is a terrorist, citizens rise to defend their brothers and eliminate the enemy. In the Kirya in Tel Aviv and Kiryat Arba, Petah Tikva and Kiryat Gat, we see great heroism and great friendship.” I’m thrilled over this – you take the fight to your enemies, not sit around waiting to be slaughtered or trying to make nice with them. It was tweeted that it is important to make an effort so that terrorists who carry out attacks are not left alive. Later, that was deleted. Why? It’s spot on. You play the game of terrorism, expect to take a dirt nap.