I freaking love Montana[1]! And the Crow Nation simply rocks. Declaring their love of the Lord for all to see, they have erected a 33-foot billboard that loudly and colorfully proclaims: “Jesus Christ Is Lord.” The Christians of the Crow Nation also heart Israel, certainly far more than our President does. So much for liberals crying and gnashing their teeth over the poor Indians. The Crow Nation believes in the free practice of any religion. That even includes Liberals, who I am sure are forming a drum circle as I write this. 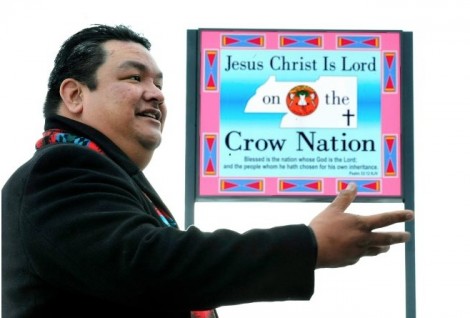 If you are driving through Montana[2], you might come across a 33-foot billboard from the Crow Nation declaring, “Jesus[3] Christ is Lord.”

No doubt it makes liberals want to break out diseased blankets, but the Crow Nation has no reason to be concerned.

The Crow Nation’s constitution allows for the free practice of any religion[4].

“AS a sovereign nation, we’re not bound by separation of church and state,” said Stewart. “People are afraid to say, ‘Jesus’ in the political arena, but we did it today, as a people.”

Tribal[5] members also say the sign is about peace.

“Within our nation is a struggle of peace,” said tribal secretary, AJ Not Afraid. “This is part of the foundation to initiate peace, initiate joy, initiate happiness.”

The sign also quotes Psalm 33:12, “Blessed is the nation whose God is the LORD; and the people whom he has chosen for his own inheritance.”

The Crow Nation has strong ties to the Pentecostal denomination.

In the 1920’s Pentecostal missionaries John and Georgia Forbes introduced the Crow Nation to the teachings of Jesus Christ.

The Crow Nation is also a strong supporter of Israel having passed a sister bill to the “Jesus is Lord” resolution declaring their support for the nation of Israel. (H/T blessings.buzz[6])

The Crow Nation is wise indeed remembering that a nation who follows God, is blessed by God. And a nation who turns from God, will have Him turn from them. They embrace their faith and walk the walk of true Christians. They are an inspiration for all of us. Good for them that they don’t believe in the separation of church and state. That has been abused horribly. We should all be proud to declare Jesus is Lord and tell the Progressive secularists to collectively stuff it.