Iranian Court Sentences Man to Have Eye Gouged Out

Shariah Law in action.[1] This young man ran to a car accident that his dad was in and somehow got involved in a street fight. During the altercation, he accidentally injured someone in the eye. For his crime, the Mullahs will gouge out one of his eyes in retribution. It’s a cruel and medieval sentence that shows there is no justice, no pity and no humanity in these monsters. Following this sentence, Ms. Farideh Karimi, a member of the National Council of Resistance of Iran (NCRI) and a human rights activist, said:

“It is deeply regretful that European governments are not protesting such cases of barbarity in Iran. These savage acts which constitute torture are enshrined in the Iranian regime’s laws. At least four people were hanged in public in Iran last month. Such public hangings also constitute a form of public torture. When people are urged to go to the scene, everyone who is faced with that sight is also tortured by that barbaric act. One must ask: Why has the EU closed its eyes to these atrocities.”

Iranian courts have openly defended limb amputations, eye gouging, stoning and hanging as just forms of punishment for the most minor of offenses. The person being tried almost never has any recourse. In such a vicious and brutal environment, does anyone have any doubt these beasts will use nuclear weapons against those that they hate? Ponder that. 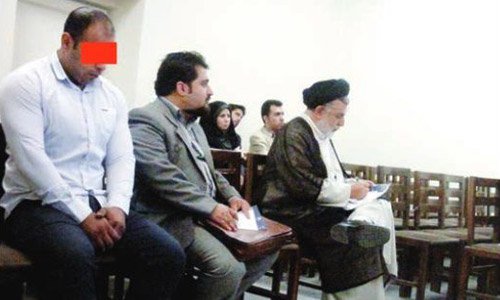 The mullahs’ inhuman regime in Iran has sentenced a young man to be blinded.

The cruel and medieval sentence was handed down on Saturday (August 1) to the 27-year-old man only identified by his first name Hamed.

Hamed had told the regime’s court that in March 2011, when he was 23 years old, he unintentionally caused an eye injury to another young man in a street fight, according to the official state-run Iran newspaper.

“It was around midnight and I was sitting at home when my mother called me and said that my father had gotten into a car accident. I rushed to the scene to help my dad, but I really didn’t intend to injure anyone’s eye,” Hamed told the regime’s court.

Mohammad-Javad Larijani, the head of the Iranian regime’s ‘Human Rights Council’, said on April 10th, 2014: “The problem is that the West does not understand that Qisas (law of retribution) is different from execution. We are not ashamed of stoning or any of the Islamic decrees.” And if that isn’t twisted enough for you, dig this, he has also said: “Retaliation and punishment are beautiful and necessary things. It’s a form of protection for the individual and civil rights of the people in a society. The executioner or the person administering the sentence is in fact very much a defender of human rights. One can say that there is humanity in the act of retaliation.” Since Hassan Rouhani took over as president of the clerical regime in 2013, more than 1,800 people have been executed and hundreds more have been subjected to degrading and inhumane punishments such as amputation, flogging in public, as well as being paraded in the streets like animals. The Iranian’s torture, execution and amputation chambers are legendary. Their public squares run with the blood of those that are subjected to their methods of justice. These are the barbarians that our president lies down with. Demons all.