Archbishop Martin is absolutely right[1]. This is not only an issue of grave concern here in America regarding our Constitutional rights, it is an issue for religious freedom worldwide. If you redefine the meaning of traditional marriage, you open the door to governments being able to control what a church teaches and what individuals say. You empower the notion of global governance and enforced social equality across the globe. Religious freedom has never been at more risk than it is today because of Progressive Marxists and militant activists pushing for the restriction of free speech and freedom of religion. It is the tipping point of individual freedom vs. globalist tyranny. 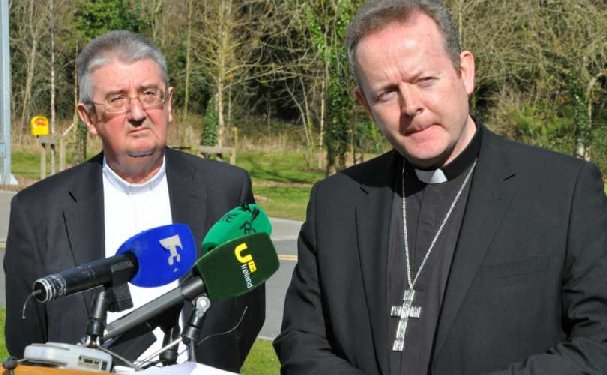 Archbishops Diarmuid Martin of Dublin and Eamon Martin of Armagh

May 6, 2015 (LifeSiteNews.com[2]) — Archbishop Eamon Martin of Armagh, Primate of All Ireland, has warned that a yes vote in the upcoming same-sex “marriage” referendum will change the meaning of marriage in the Constitution of Ireland and result in the destruction of religious freedom.

“If society adopts and imposes a ‘new orthodoxy’ of ‘gender-neutral’ marriage, being defined simply as a union between any two persons – including a man and a man, or a woman and woman – then it will become increasingly difficult to speak or teach in public about marriage as being between a man and a woman,” Archbishop Martin said in a statement[3] on the Irish Catholic Bishops’ Conference website.

“Will there be lawsuits against individuals and groups who do not share this vision? What will we be expected to teach children in school about marriage or about homosexual acts? Will those who continue to sincerely believe that marriage is between a man and a woman be forced to act against their faith and conscience?” the archbishop speculated.

Archbishop Martin noted that supporters of the true meaning of marriage have already been treated with derision by “yes” activists who brand them as equality-denying bigots and “homophobes.”

“How have we got ourselves into the situation that when people stand up to guard the dignity of difference between a man and woman, and speak for the traditional definition of marriage, they are often portrayed as being against freedom, or against equality?”

“How is it that many people won’t even raise these issues in their families and workplaces for fear of being ridiculed or condemned as homophobic? Could we not expect at least some of our legislators to engage in public discussion on both sides of this debate?” said Archbishop Martin.

The archbishop observed that, “during the current debate we are conscious of same-sex partners who love each other and wish to share their life together.”

However, he pointed out that, “marriage is about much more than a loving relationship between consenting adults. Marriage has another essential element – the openness to children who are born of the love and sexual relationship of their mother and father. This is why, as Article 41:3:1 of the Constitution puts it: The State pledges itself to guard with special care the institution of Marriage, on which the Family is founded, and to protect it against attack.”

He explained that the State encourages and favors the marriage of a man and a woman, open to children, because it is for the common good.

“It not only satisfies individual love and needs, but it also ensures the future of society and forms the ideal environment for the development of children.”

Archbishop Martin stated emphatically that the Irish bishops in no way support the amendment to the Constitution to redefine marriage.

He quoted the teaching of the Catholic Church on the issue of same-sex unions as reiterated by the Extraordinary Synod on the Family in Rome, 2014, which states, “There are absolutely no grounds for considering homosexual unions to be in any way similar or even remotely analogous to God’s plan for marriage and family.”

The full text of Archbishop Martin’s message on the marriage referendum is available here[4].

Christians and Jews of all sects stand in unity on this issue pretty much. Here in America there is an active revolt brewing where Christians are declaring as one, “We will not obey!” Here in the US, our Constitution and Bill of Rights are being trashed and gutted by the Left. Americans need to stand against this steadfastly. Their efforts to force the issue of social justice down our throats is unconstitutional and fascist. We are long past the point where we should be standing up, regardless of the names we are called, and saying that this is wrong and will not stand. Christians stand for religious freedom and equality – the opposite is being forced upon us by the Left and then they claim the opposite. Time to choose a side and state with conviction what you believe in. History and God will be the judge.