ISIS Boasts: We Will Cut Off Obama’s Head and Turn the US Into a Caliphate [Video]

Promises, promises[1]. ISIS may attack us on our own turf, but if they do, they will rue that day. All this testosterone-laden bloviating from these murderous scumbags is tedious. You crucify and behead in the name of your god Allah… but in reality, it is just one more excuse for psychotic genocide and the partying of monsters. The Caliphate will never fly their flag over the White House… not because we feel anything but contempt for Obama… but because Americans won’t stand for it and we are armed. If you bring your barbarity to our backyard, prepare to be martyred. We’ve got nothing better to do and can’t wait to dance with you. 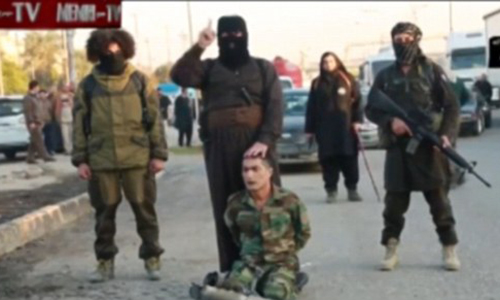 In a sickening new video from the Islamic State (ISIS), the terror group has vowed to cut off President Barack Obama’s head and turn the United States into a Muslim caliphate.

A black-clad extremist, with his face covered, is shown railing against America before beheading a captured Kurdish soldier kneeling in front of him.

Moments before carrying out the execution, the ISIS fighter warned, “Know, oh Obama, that we will reach America. Know also that we will cut off your head in the White House and transform America into a Muslim province.”

The video was revealed on The Middle East Media Research Institute TV Monitor Project (Memri TV)[2], which translated it from Arabic and posted the footage on its website.

The video shown here does not include the beheading.

According to Daily Mail.com[3], the extremist’s threats included a message for France and its “sister” state, Belgium.

He said: “We advise you that we will come to you with car bombs and explosive charges and will cut off your heads.”

Earlier this month, Islamic terrorists were shot dead by police after they had killed 17 people in France. Soon afterward, Belgium police smashed an Islamic terror cell that planned to kill a policeman or judge.

The masked militant also had a warning for the Kurdish leader Masoud Barzani, the central figure behind the counterattack against the Islamic State, which has captured vast areas of Iraq and Syria as part of its master plan to turn the world into a caliphate.

“As for you, oh Masoud, you dog, we are going to behead you and throw you into the trash bin of history. Know that we are men who fear no-one. We will institute the laws of Allah, may he be exalted and praised.”

“You are killing children and bombarding civilians while claiming that this is forbidden in your constitution.”

The video surfaced just two days after Kurdish fighters had defeated the Islamic State during a battle for the strategic Syrian town of Kobane on the Turkish border after four months of ferocious fighting, the Mail reported.

ISIS is nothing more than a bunch of masked cowards who get off on rape, murder, torture, theft and power. You are demons – every last one of you and you should rot in the lowest pit of hell. Notice how brave that Kurdish soldier is? That’s a real man. ISIS has no men – only craven barbarians who want to play at being warlords. They are so weak that simple cartoons are not even tolerated. All they know is a broken political construct and a warped theology. Every last soldier of ISIS is nothing more than a lowly beast that crawls on its belly in the dust of history. More boasts from intellectually challenged braggarts.