If you are going to fire on a Syrian Mig while yelling ‘Allahu Akbar!’, you can expect to get splattered[1] all over the landscape. Yes, folks… this is your feel-good video of the day. Fresh on the heels[2] of Islamic terrorists killing 12 in a Paris newspaper office this morning, we are honored to watch these asshats get blown up. If you poke the fighter jet badger, expect to get chewed up. 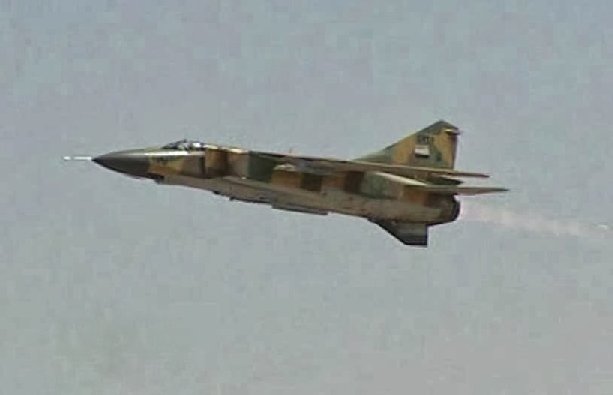 Islamic militants with anti-aircraft guns around Mount Zawiya face off against a Syrian MiG. Despite a lot of yelling and spraying of machine gun fire, it turns out that the militants only ticked the fighter pilot off.

When the MiG turns around to go up against the extremists, let’s just say the message he sends to the soldiers is”final.”

I could watch this video all day long. They were stupid enough to just sit there as the plane turned and delivered a missile into their laps. That was a one way ticket to their hellish paradise. There are a few less radical Islamists to worry about now and the world is that much better for it. Evidently IQ is not a prerequisite for being a murderous militant. However, it is a bonus in your favor to have the IQ of a Jihadist if you are looking to die in multiple, horrific ways. The Mig delivered a final gift to these Jihadis and it exploded. Good times.