Shariah is a primitive, backwards system of law usually championed by illiterate savages. It encourages rape, makes women into property and drags a society screaming back into the dark ages. No intelligent person who means well could possibly believe that Shariah is compatible with a free and democratic society[1]. Which brings us to CAIR. 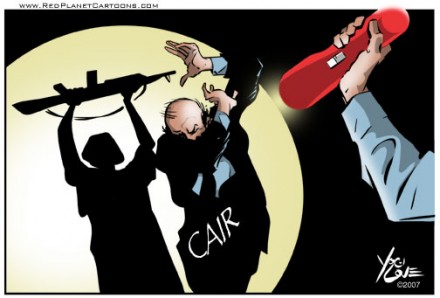 [B]ut, as you may have noticed, the ideals, the principles behind our expression of democracy do offer us a guide to the target of our thoughts tonight.

Two documents give us a sense of the recipe:

The Declaration of Independence asserts that the right of the people “to alter or to abolish their government” must remain intact and the people must have the freedom to lay government’s “foundation on such principles” and organize “its powers in such form, as to them shall seem most likely to effect their Safety and Happiness.”

The Constitution adds additional thoughts: “to form a more perfect Union, establish Justice, insure domestic Tranquility, provide for the common defence, promote the general Welfare, and secure the Blessings of Liberty to ourselves and our Posterity.””

Let me remind you of the two main goals and six main principles of sharia. The two goals are to bring good to humanity, and to repel harm from humanity.

All religious rules must be in line with these six principles of sharia:

So, to my understanding, our original topic tonight has the effect of slicing us into two different camps. “Is sharia (them) compatible with democracy (us)?”

I am pretty sure, hearing that topic, most of you did not come here expecting an American history lesson. However, I pray that what I have said tonight brings you to share my conviction that we are, in fact, allies.

Islam and American democracy may disagree on some things. However, just as best friends often disagree without it hurting their relations we too can be adults and debate differences while partnering on ideals. Frankly, those differences are relatively minor. Violent extremists like al-Qaeda may trying to convince you otherwise, but they are everyone’s enemy.

I also pray that we can now start our conversation from a healthy place – not one of “us vs. them,” but of how do we work together to establish our shared ideals of justice.

This is exactly the sort of thing that gets people frustrated with “moderate Muslims.” They KNOW this isn’t true and if they wanted to live in a nation with Shariah law, they’d be there now. Instead, they sit by silently while terrorist sympathizing dirtbags like CAIR claim to represent them and champion primeval stupidity like Shariah in their names.

There are a lot of good, patriotic Muslims in this country. We need you to stand up, speak out and fight back against groups like CAIR.