Ebola is a scary disease and it’s incredibly encouraging that an experimental drug has cured Christian Doctor Kent Brantly, who contracted the disease treating patients in Africa. Some people were worried about bringing him back to the United States to be treated, but it definitely paid off[1]. 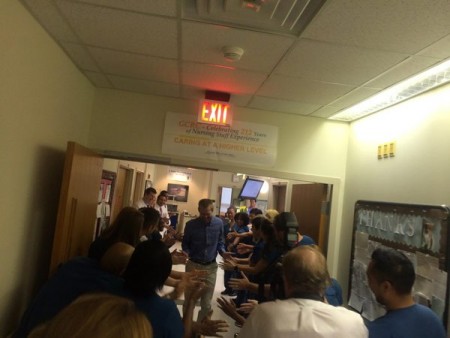 Released from Emory Hospital Thursday after experimental treatment for Ebola, Samaritan’s Purse Dr. Kent Brantly held a brief press conference to thank hospital staff as well as God for their role in his miraculous recovery. “I want to express my deep and sincere gratitude to Samaritan’s Purse, Emery and all of the people involved in my treatment and care,” said Brantly. “Above all, I am forever thankful to God for sparing my life.”

Isn’t that a great feel good story? Here you have a man doing selfless work in Africa who contracts a terrible disease, he’s brought back to America, healed using an experimental drug and he’s profoundly grateful to everyone who helped and God.

Who could have a problem with that?

Apparently, a lot of people.

Ebola Patient Dr. Kent Brantley is the Douchebag of the Day, thanking God rather than the doctors who saved his life. http://t.co/KtFtS3s1Vs[3]

Ebola patient Dr. Kent Brantley says "God saved my life." – No, The drugs did.- This is an insult to the families of all who died of Ebola.

Dr Kent Brantley believes 'a faithful God' saved him from Ebola. All those who have died? God was obviously having an off-day. Idiot.#Ebola[6]

Dr. Kent Brantley thanks god for saving his life, not the doctors and researchers who dedicate their lives to helping others. What a douche.

If I was his Dr. I would inject him with Ebola and say " good luck with that god thing" http://t.co/hfo8cQjxw7[9]

It’s one thing to say you don’t believe in God and it’s quite another to get so upset by people who do that you lash out at them. That’s an indication that there’s something broken and twisted in you as a human being that needs to be repaired.