Tragedy struck once again in the Muslim holy city of Mecca[1] in Saudi Arabia this morning. Over 700 were killed in a stampede outside the city and over 800 were injured in the crush. This comes a mere two weeks after lightning and high winds collapsed a crane over the Grand Mosque in Mecca killing 110. Muslims are commanded to make the trip at least once during their lifetimes in a pilgrimage to Mecca during the Hajj. People were already exhausted and fainting when two groups collided causing the stampede. It is being said this is one of the most poorly organized pilgrimages in the history of the Hajj. It is certainly one of the most deadly – it is the worst death scene there in 25 years. Of course, Iran is now blaming Saudi Arabia. No love lost there and any excuse to level blame at an enemy. I guess stoning the devil backfired this year. 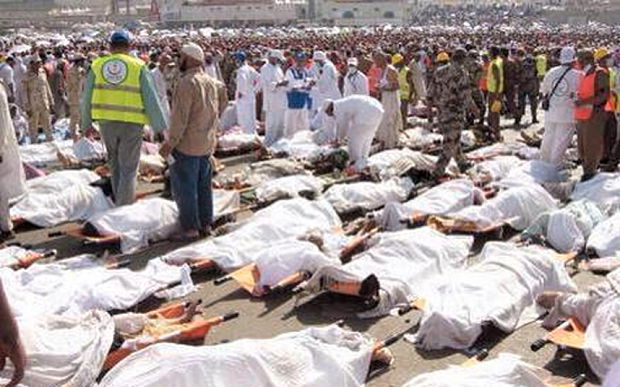 At least 717 pilgrims were killed on Thursday in a stampede outside the Muslim holy city of Mecca, Saudi authorities said, the worst disaster to strike the annual hajj pilgrimage in 25 years.

At least 805 others were injured in the crush at Mina, a few miles east of Mecca, caused by two large groups of pilgrims arriving together at a crossroads on their way to performing the “stoning the devil” ritual at Jamarat[3], Saudi civil defence said.

Thursday’s disaster was the worst to befall the pilgrimage since July 1990, when 1,426 pilgrims were crushed to death in a tunnel near Mecca. Both stampedes occurred on Eid al-Adha (Feast of the Sacrifice), Islam’s most important feast and the day of the stoning ritual.

The country’s health minister blamed undisciplined pilgrims for the incident, saying the tragedy would not have occurred if they “had followed instructions”.

Khaled al-Falih was quoted by El-Ekhbariya television as saying “many pilgrims move without respecting the timetables” established by authorities, which was the “principal reason for this type of accident”.

“If the pilgrims had followed instructions, this type of accident could have been avoided.

A hospital official told AFP the incident happened outside the Jamarat Bridge structure. A group of pilgrims leaving the area collided with another group that was either moving in the opposite direction or camped outside, the official said.

A Sudanese pilgrim in Mina said this year’s hajj was the most poorly organised of four he had attended. “People were already dehydrated and fainting” before the stampede, said the pilgrim who declined to be named.

People “were tripping all over each other”, he said, adding that a Saudi companion had warned him that “something was going to happen”.

Photographs published on the Twitter feed of the Saudi civil defence on Thursday showed pilgrims lying on stretchers while emergency workers in high-visibility jackets lifted them into an ambulance.

The hajj, one of the world’s largest annual gathering of people[4], has been the scene of numerous deadly stampedes, fires and riots in the past, but their frequency was greatly reduced in recent years as the government spent billions of pounds upgrading and expanding hajj infrastructure and crowd control technology.

Safety during hajj is a politically sensitive issue for the kingdom’s ruling Al Saud dynasty, which presents itself internationally as the guardian of orthodox Islam and custodian of its holiest places in Mecca and Medina.

More than 25,000 Britons go annually for the hajj, according to the British Hajj Delegation[5]. The organisation said on its website that the UK was the first Western non-Muslim country to send a hajj delegation to assist UK citizens.

Unverified video posted on Twitter showed bodies, clad in the white towelling of those undertaking hajj, lying on the ground by the side of the road, surrounded by debris, as pilgrims and rescue workers attempted to revive them.

Street 204, where the stampede occurred, is one of the two main arteries leading through the camp at Mina to Jamarat, the site where pilgrims ritually stone the devil by hurling pebbles at three large pillars. In 2006, at least 346 pilgrims died in a stampede at Jamarat.

Reuters reporters in another part of Mina said they could hear police and ambulance sirens, but that roads leading to the site of the disaster had been blocked.

“Work is underway to separate large groups of people and direct pilgrims to alternative routes,” the Saudi Civil Defence said on its Twitter account.

It said more than 220 ambulances and 4,000 rescue workers had been sent to the stampede’s location to help the injured. Saudi-owned Al-Arabiya television channel showed a convoy of ambulances driving through the Mina camp. Some of the wounded were evacuated by helicopters.

Iran[6] accused Saudi Arabia of safety errors after at least 43 of its citizens died.

Said Ohadi, head of Iran’s hajj organisation said that for “unknown reasons” a path had been closed off near the scene of the symbolic stoning of the devil ritual where the accident later took place.

“This caused this tragic incident,” he said on Iranian state television.

An Arab pilgrim who did not want to give his name said he had hoped to perform the stoning ritual later on Thursday afternoon but was now too frightened to risk doing so.

“I am very tired already and after this I can’t go. I will wait for the night and if it is not resolved, I will see if maybe somebody else can do it on my behalf,” he said.

Efforts to improve safety at Jamarat have included enlarging the three pillars and constructing a three-decker bridge around them to increase the area and number of entry and exit points for pilgrims to perform the ritual.

Two weeks ago 110 people died in Mecca’s Grand Mosque when a crane working on an expansion project collapsed[7] during a storm and toppled off the roof into the main courtyard, crushing pilgrims underneath.

Bodies can be seen draped in white lying on stretchers and the ground with emergency personnel trying to tend to the living and the dead. Islam’s number of followers are growing drastically across the globe and violence frequently occurs during this trek. As the numbers of the devout make the journey, more and more incidents like this are sure to follow. The pilgrimage is one of the ‘Five Pillars of Islam.’ It lasts for five days. The pilgrimage occurs during the last month of the Islamic year, called “Dhul-Hijjah. The event is also marked by the Islamic holiday, Eid al-Adha. This year, over three million people are expected to make the journey. The Grand Mosque at the center of Mecca, where pilgrims gather to pray and circle the cubic Kaaba building, can hold more than 1.5 million people. Pilgrims must walk seven times around the Kaaba, the cube-shaped building at the center of the Grand Mosque, pray at nearby Mount Arafat and ritually stone the devil by hurling pebbles at three walls. This year will also be marked as the greatest death toll since 1990, when 1,426 were killed in a stampede inside a pedestrian tunnel leading out from Mecca towards Mina and the Plains of Arafat. The festival took a very sad turn indeed today. 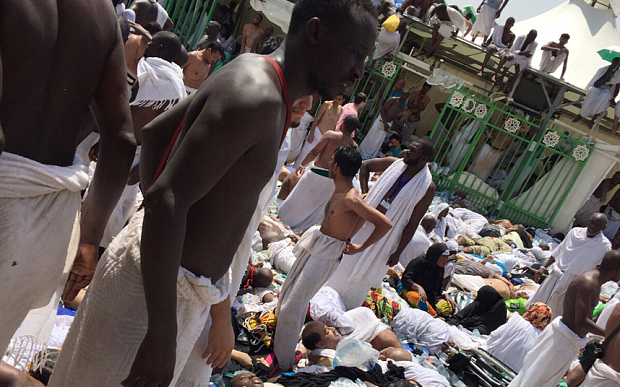 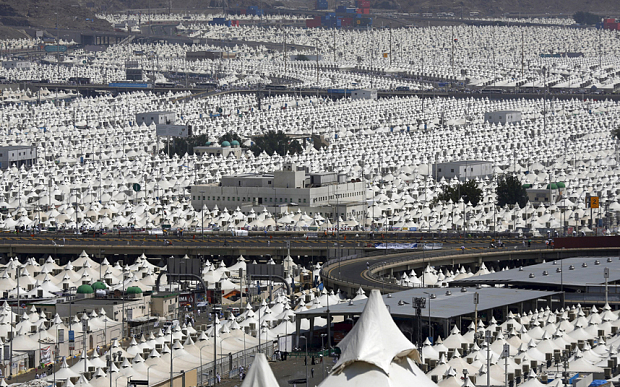