I understand wanting to pray at work, but when there 190 employees of the same faith who have to stop working to pray for five-to-ten minutes, numerous times a day, the amount of work NOT getting done is a detriment to the business. 190 Muslims[1] learned that their opinion of prayer being more important than work was not shared by their boss. 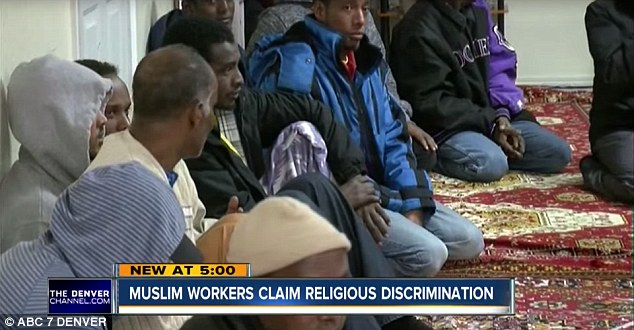 One hundred ninety Muslim workers at a Colorado meat packing and distribution plant have been fired after walking off the job to protest a workplace prayer dispute.

The Denver Post reported that more than 200 workers, most of them immigrants from Somalia, walked off their jobs at Cargill Meat Solutions in Fort Morgan 10 days ago.

The majority of the employees didn’t return to their jobs as representatives from the Council on American-Islamic Relations (CAIR) attempted to negotiate on their behalf with the company.

Jaylani Hussein, a spokesman and executive director of CAIR, told the Post that through Cargill’s attorneys, 190 workers were fired for holding out on Tuesday.

He explained that some of the fired employees had been working at the company for nearly 10 years.

The company previously allowed Muslim employees to pray at the plant, and even provided a prayer room for them, Hussein told the Post.

The workers would pray at different times of the day in about five-to-10 minute blocks depending on the season, he added.

However, a decision was reportedly recently made at the plant to change the long-running practice.

‘The workers were told: ‘If you want to pray, go home,” Hussein told the Post.

The reason why they came together and walked off the job was an attempt to change plant managers’ decision about the prayer schedule.

Instead, Hussein said he was informed of the mass firing by the plant on Tuesday, despite CAIR’s negotiations.

‘It’s disappointing,’ Hussein told the Post. ‘They feel missing their prayer is worse than losing their job. It’s like losing a blessing from God.’

He explained that officials with the company said it was over a ‘no call, no show, walk out.’

Previously, the Muslim workers were using time out of a 15-minute break period or time from their unpaid 30-minute lunch break, the Post reported.

Director of communications for Cargill, Mike Martin, told the Greeley Tribune last week that employees of all faiths are allowed to use a reflection area.

He said that due to employees working on an assembly line, only one or two at a time can use the area to avoid slowing production at the plant.

Furthermore, Cargill has a policy that states any employees who are fired can not reapply for a job for at least six months.

Note to the former-employees, you were not fired for being Muslim, you were fired for walking out of the building during business hours with no intent to return. There is no discrimination, only entitlement.