This would not surprise me at all[1]. Obama is known for his Chicago mafia tactics and this would be par for the course. Either change your laws and condone homosexuality and allow abortions for all, or the Christians get it. Obama has allowed thousands of Nigerian Christians to be slaughtered and thousands of girls and women to be taken as concubines (sex slaves) for the men of Boko Haram. They are sold, claimed or gifted, just like cattle. Christians are being sacrificed on the alter of multiculturalism/collectivism and Islam. Population control equals eradicating those that are not devout Marxists or Islamists. America – your government is condoning and facilitating genocide. 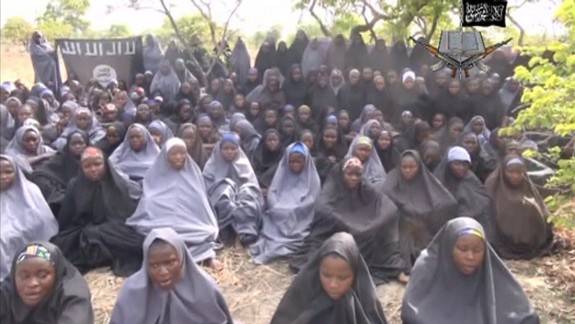 A Catholic Bishop from Nigeria has leveled an explosive charge against President Barack Obama over his failure to adequately help Nigeria in the African nation’s fight againt the Islamist terrorist group Boko Haram that might explain why Obama has let Boko Haram slaughter Nigerian Christians and rape and enslave Christian girls.

Bishop Emmanuel Badejo spoke in Rome to Aleteia[2], saying of the Obama administration:

“The United States actually said it would help Nigeria with Boko Haram only if we modify our laws concerning homosexuality, family planning, and birth control.”

“The U.S. maintains a drone base in Chad, from which it conducts surveillance flights to monitor Boko Haram. It has provided training and some equipment to the Nigerian military, including $80 million of such support last year alone. Some U.S. legislators have said they want Special Forces troops shipped to Nigeria to help combat Boko Haram.

“But various issues have prevented closer cooperation. Training exercises with the army have been canceled over equipment disputes. Allegations that Nigeria’s military is guilty of grave human-rights abuses in battling Boko Haram—charges that Mr. Jonathan asserts are overblown—cloud the relationship. Many U.S. officials doubt that Islamic State would be able to forge a working partnership with a distant insurgency like Boko Haram, although the two groups voice mutual admiration.”

President Jonathan did not mention the morals issues in the interview with the Wall St. Journal, but he said his government has been asking without success for the Obama administration to send military advisors and combat troops to Nigeria since early 2014. Pentagon spokesman Rear Adm. Kirby John Kirby told the Journal the administration has not received any such requests and that “there are no U.S. troops operating in Nigeria.”

In August 2014, then U.S. Rep. Steve Stockman(R-TX) made a similar charge[3] to Bishop Badejo’s, saying the Obama administration was withholding aid to Nigeria in the fight against Boko Haram in part over Nigeria’s “social policy.”

The charge was denied by a State Department offical at a recent House hearing[4].

Bishop Badejo also questioned[5] the West’s failure to curb financing of Boko Haram, speculating that the group has been allowed to flourish as a means of ‘population control.’

“In fact, recently I was alarmed when I heard Hillary Clinton, as Secretary of State, say that the United States government was committed to anything that would push the population control agenda. The United States actually said it would help Nigeria with Boko Haram only if we modify our laws concerning homosexuality, family planning, and birth control. It’s very clear that a cultural imperialism exists. In fact, I think that Africa is suffering greatly from a cultural imperialism that threatens to erode our cultural values.

“And I think, to say the least, it is criminal. Because if the West boasts of being committed to human freedom, mean it. If there are values that the West cherishes, they must not impose those values on Africa. It is part of human freedom. And at least Africa can stand up and say: “These are the values we cherish and these are the values we want to keep.” If the West cherishes freedom for gays and homosexual unions and abortion and contraception, suppose Africans are not wired that way. For the African, life is sacred. And that the world can watch hundreds of people dying in Nigeria every day and look away: it shows that even what we call Western civilization today is sick. What we say about human dignity and human rights is mere hypocrisy. There is a diminishing sense of the respect for the sanctity of life. And all of this is to be imposed on Africa, at whatever cost: we think that it is immoral and that it is unjust.”

It is criminal – it’s monstrous. We swore we would never let the holocaust happen again and that didn’t just mean the Jews. Well, Obama is helping it happen again. I never thought I’d see the day that our President would be at the forefront of mass murder and slavery. Africa is a free country. Just whose side is Obama on? Looks like he sides with the Islamo-fascists. He’s actively helping warlords murder, rape and enslave. His message to Africa is either ditch your cultural values and morals or we will allow Boko Haram to annihilate your Christian populace. No arms for you if you don’t play ball. Be a shame if anything were to happen to African Christians.