The: Army: got a stern warning from a Defense Department representative recently. Avoid the word “Christmas” under all circumstances. 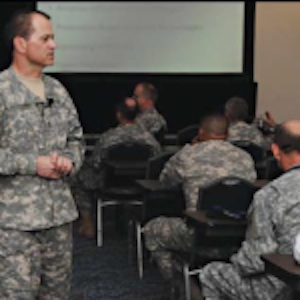 [1] An: equal opportunity officerdelivered the message to leaders of the 158th Infantry Brigade at Mississippi’s Camp Shelby, according to: Fox News.

An unidentified soldier attending the meeting said that when the subject of the upcoming Christmas football game was brought up, the officer immediately told the attendees that the word “Christmas” couldn’t be used.

When a brief, heated discussion on political correctness ensued, the equal opportunity officer said those weren’t her rules – they were the Army’s.

The soldier has since hired a lawyer.

“It’s unbelievable that the Army would ban ‘Christmas’ like it’s a bad word,” said Michael Berry, an attorney with the Liberty Institute, a legal firm representing the soldier. “Are they going to have the ‘Merry Christmas’ police going around issuing citations to an soldier who slips and says the word? They’re treating Christmas like it’s pornography. As a matter of fact, the Army actually treats pornography better than it does Christmas.”

It’s not the first time Equal Opportunity officers have caused trouble at Camp Shelby. Earlier this year, I reported exclusively about a briefing at Camp Shelby that labeled the American Family Association as a domestic hate group.

After my story was published, the Secretary of the Army ordered military leaders to halt all briefings on extremist organizations that labeled Evangelical Christian ministries as domestic hate groups.

Until this gets all sorted out, the Department of Defense wishes everyone a very merry winter.