How did a plumber’s pickup truck from Texas end up carrying an anti-aircraft gun for Islamic fighters on the front lines in Syria? [Video]

ISIS is very adept at manipulating media for use on social media sites such as Twitter and Facebook. Substituting this pickup truck in the photo would not have been difficult at all. I am sure it was meant to entice Westerners in Texas and blue collar workers to their cause. Fail. Having said that… Americans need to recognize propaganda when they see it and realize who the real enemy is and not off-the-cuff attack some plumber in Texas. We have enough enemies out there without traumatizing a good American.[1] 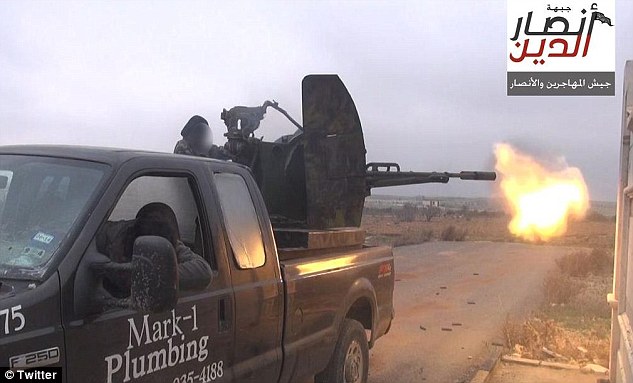 This truck, once owned by Mark-1 Plumbing in Texas City, Texas, is seen here in an Islamist propaganda photo. It’s unclear if it has gone all the way to Syria or whether the photo has been digitally altered.

Mark Oberholtzer isn’t an Islamic fighter in Syria. He’s never been to Syria. And the plumber from Texas City, Texas, says he certainly would never willingly aid fundamentalist rebels.

So it’s hard for him to understand how his Ford F-250 pickup truck – including his logo for Mark-1 Plumbing and his phone number – wound up being in a photo posted on Twitter by the extremist Ansar al-Deen Front from the front lines of the war in Syria.

Mr Oberholtzer says he’s been getting hundreds of phone calls and faxes since the Ansar al-Deen Front tweeted a picture of what appeared to be his old truck with an anti-aircraft gun in the back, according to the Galveston County Daily News[3].

However, it remains to be seen if the photo is entirely authentic, with a new video surfacing which suggests the photo could have been digitally altered.

The Islamist forces fighting across the region are known for their advanced and technical digital propaganda campaigns.

The video, featuring a different vehicle firing from exactly the same position, raises the possibility Mr Oberholtzer’s vehicle may have been photoshopped into a video frame.

Superimposing a better vehicle and gun into a still frame from the original video would be significantly easier than trying to alter the video itself.

This could be why the video features an older model car and weapon, but the photo features Mr Oberholtzer’s later-model Toyota.

Despite this, people have now been making hateful phone calls to Mr Oberholtzer’s company in the mistaken belief he is supporting the fundamentalists.

‘A few of the people are really ugly,’ he told the newspaper.

Some threatened his life.

Mr Oberholtzer says he has hired a lawyer and wants to make Twitter remove the posting, CBS News[4] reports.

He says he sold the truck to an AutoNation dealership three years ago.

The plumber made a mistake by not removing his logo first, but the dealer definitely should have. Never assume any type of printing on something used by a Jihadist is what it seems. They will lie, manipulate and twist any situation to their favor and this is one of them I would wager. Those useful idiots who willingly join ISIS deserve everything they get. By the way, a real stone-cold warrior wouldn’t publicize going – he’d just go. The Caliphate and ISIS use deception to recruit and if they can either lure Texans or smear Americans, they are all for it. They do the devil proud.