How do you know an entity is truly evil? When their activities are so atrocious that even the Pope is calling for them to be attacked, which is exactly what Pope Francis is doing: telling the UN to get on it and attack ISIS already. 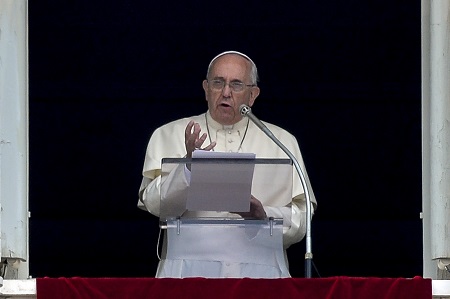 Pope Francis has written to the Secretary-General of the United Nations, Ban Ki-moon, regarding the situation in Iraq. Dated August 9, and released today (Wednesday, Aug 13), the letter condemns the violent persecutions underway in the country, and calls on the international community to act swiftly and decisively to stop the humantiarian disaster currently taking place.

“The violent attacks that are sweeping across Northern Iraq,” writes Pope Francis, “cannot but awaken the consciences of all men and women of goodwill to concrete acts of solidarity by protecting those affected or threatened by violence and assuring the necessary and urgent assistance for the many displaced people as well as their safe return to their cities and their homes.” Below, please find the full text of the letter in English.

It is with a heavy and anguished heart that I have been following the dramatic events of these past few days in Northern Iraq where Christians and other religious minorities have been forced to flee from their homes and witness the destruction of their places of worship and religious patrimony. Moved by their plight, I have asked His Eminence Cardinal Fernando Filoni, Prefect of the Congregation for the Evangelization of Peoples, who served as the Representative of my predecessors, Pope St John Paul II and Pope Benedict XVI, to the people in Iraq, to manifest my spiritual closeness and to express my concern, and that of the entire Catholic Church, for the intolerable suffering of those who only wish to live in peace, harmony and freedom in the land of their forefathers.

In the same spirit, I write to you, Mr Secretary-General, and place before you the tears, the suffering and the heartfelt cries of despair of Christians and other religious minorities of the beloved land of Iraq. In renewing my urgent appeal to the international community to take action to end the humanitarian tragedy now underway, I encourage all the competent organs of the United Nations, in particular those responsible for security, peace, humanitarian law and assistance to refugees, to continue their efforts in accordance with the Preamble and relevant Articles of the United Nations Charter.

The violent attacks that are sweeping across Northern Iraq cannot but awaken the consciences of all men and women of goodwill to concrete acts of solidarity by protecting those affected or threatened by violence and assuring the necessary and urgent assistance for the many displaced people as well as their safe return to their cities and their homes. The tragic experiences of the Twentieth Century, and the most basic understanding of human dignity, compels the international community, particularly through the norms and mechanisms of international law, to do all that it can to stop and to prevent further systematic violence against ethnic and religious minorities.

Confident that my appeal, which I unite with those of the Oriental Patriarchs and other religious leaders, will meet with a positive reply, I take this opportunity to renew to your Excellency the assurances of my highest consideration.

Even the Catholic Church understands that sometimes, war is necessary when needed to prevent true evil from flourishing and spreading. It’s a lesson that seems to have gone above our president’s head, though.