The Reverend Franklin Graham[1] is a man of principled conviction. I admire him and his father beyond words. He’s stating the blunt truth here – Islam is not peaceful. They crucify, torture, behead, stone, burn, mutilate, hang and shoot innocent people… they slaughter, rape and conquer everywhere they go. Duke backed down because it hurt their pocketbook and it was bad PR, not because it was the right and sane thing to do. They obviously know nothing about Islam either, or they would know that once prayers are held somewhere, the place is believed to belong to Islam. The Ummah believes they have conquered America from within. Graham is one of the few that are brave enough to say what we all know. It will take millions to defeat the soldiers of Allah here in the US and worldwide. 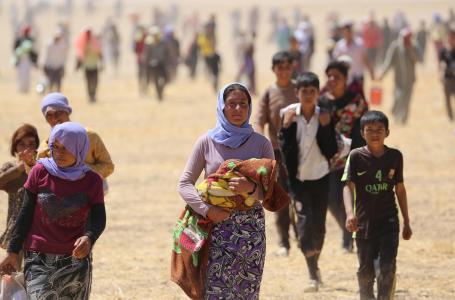 Yazidi women and children flee Iraq to escape from the forces of the Islamic State. (AP)

Reverend Franklin Graham, son of world-renowned evangelical preacher Billy Graham, said that “Islam is not a peaceful religion” and wherever you go where it is dominant, you do not find “evidence of peace” but instead find adherents who “butcher” and “behead people,” and “take women and rape them.”

“Islam is not a peaceful religion, there’s nothing peaceful about it,” Rev. Graham told WNCN News[2] in an interview about Duke University’s plan (now cancelled) to allow the Muslim Call to Prayer from the bell tower of the campus’ Christian chapel.

“You can’t go anywhere in the world, whether it’s Sudan, Egypt, Saudi Arabia — where Christians and Jews were killed years ago and removed from their country — all the way to Iraq, Syria, there’s nowhere where you see evidence of peace,” said Graham, who heads the international relief group Samaritan’s Purse[3].

“They butcher, they behead people, they take women and rape them,” he said. “If you’re from another religion, the Yazidi women up on Mt. Sinjar, we saw in northern Iraq, up in the Kurdish areas, those girls were taken and they’ve been sold to other Muslim men and they’re used as sex slaves, and Islam permits slavery.”

So, I’m very discouraged at the ignorance of the people at Duke University, the leadership, in not understanding what they’re doing and not understanding Islam,” said Graham, who is president of the Billy Graham Evangelistic Association[4].

Although Duke University cancelled its plan to allow the Muslim Call to Prayer to be broadcast from the bell tower of the campus’ Christian chapel, a church built by Methodists, the school does allow its approximately 700 Muslim students to worship in a room in the chapel. In addition, the students are allowed to broadcast the Muslim Call to Prayer from a loudspeaker on the campus quad.

Commenting on the plan to allow the Prayer Call to be broadcast from the bell tower, Rev. Graham said, “The Muslims can build their own place of worship, they can have their own house of prayer. But to take the Church that was given to worship God and use that now as [an Islamic] minaret?”

Duke University had announced its plan to allow the Call to Prayer from the church tower on Jan. 14. Within 24 hours, after opposition from Rev. Graham and alumni and donors, the university reversed its decision[5].

“I am glad to hear that Duke University reversed its decision to allow the Muslim call to prayer to be broadcast from its chapel bell towers,” said Rev. Graham on his Facebook page[6] on Jan. 15. “They made the right decision.”

Duke is still letting them do the call to prayer in the quad and UCLA is allowing it on campus as well – that’s both coasts of the country under Allah’s dominion. All over the planet, the caliphate is rising. Thousands are being crucified and beheaded and we have warned on this for years… but still, in the name of political correctness and tolerance, the world gives Islamic butchery a pass. They collectively did this with the Nazis as well. America needs to seriously wake up and realize we are now in a world war with Islamo-fascists and communists. The truth hurts, but ignorance and blindness kills. 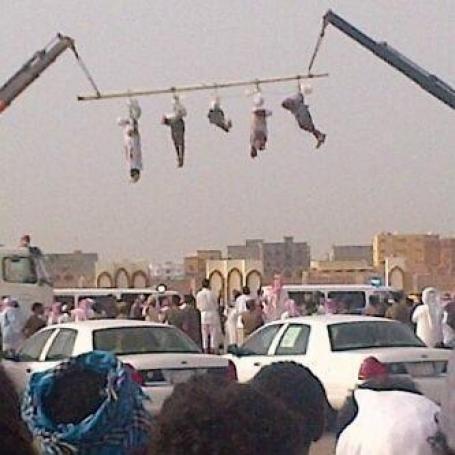 Five convicted criminals were beheaded and ‘crucified,’ put on public display in Jizan,
Saudi Arabia, their severed heads put in plastic bags dangling from their necks, May 13, 2013.
The AP reported that a man convicted of rape was beheaded in Jiddah, Saudi Arabia on Monday,
Jan. 26, 2015, in accordance with Sharia (Islamic) law.
Endnotes: