Rev. Graham: ‘Secularism and communism are same,’ they’re anti-Christ and have taken control of Washington, DC and our country [Video]

The Rev. Graham is exactly right[1] and bless him for speaking the truth. Communism didn’t go away… it shifted. You see Greece and now Spain falling to the communists in the name of anti-austerity. They spent like drunken fools and now don’t want to pay the price. So they turn to communism instead of God. Fatal mistake. The Progressive secularism pushed by Obama and the communists running our country has taken God out of our schools entirely and out of most people’s lives. It is evil and if not rectified, will be the downfall of our nation. 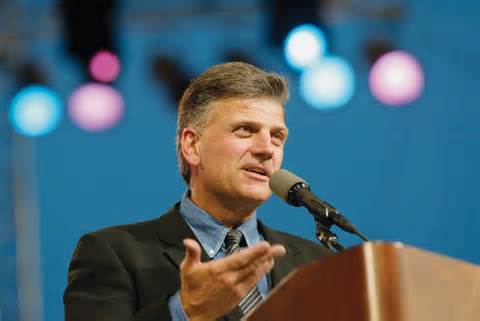 The son of famed evangelist Billy Graham is blaming secular progressive leaders in Washington, D.C., for turning America into a godless nation.

“We live in a secular society led by people that call themselves progressives,” the Rev. Franklin Graham said Monday at the Oklahoma State Evangelism Conference, according to CNS News. “When communism [and] the Berlin Wall came down, everybody said, ‘We won,’ and [then] secularism came.”

And it’s not any better than communism, he added.

Graham urged church officials “to get involved in politics” and help America return to a time when religion had more of an influence on government.

“We need men and women of God who take these local elections serious, so we can take back these various offices and have men and women of God who believe in the Bible, who stand on the word of God,” he said. “America has changed, and it’s not coming back unless the church takes a stand. There are storms that are coming, and we find ourselves in these storms, and many times, we as a church, we run. And we run to the wrong place. You see, Jesus is in the boat [with us]. All we have to do is call Him.”

Graham is correct that Christians need to run for office. It is vital – school boards are a great choice. I know that in Carson City, Nevada when I was there, most of those elected did not have children. Some were gay and had their own agenda. Some were very corrupt business people who were in it for influence and money. The sole Constitutionalist they elected was hounded and harassed to death. People were not even allowed to speak at the meetings – it was a travesty. To remove the communists from our midst, we have to start locally and methodically replacing them with strong Christians and Constitutionalists. The Red Menace never left us… it planned and manipulated and took control when we were asleep. America better wake up and fast, or we indeed, will never be the same.