Claim: Robertson Family Says A&E Is Discriminating Against Us For Being Christian

Aren’t they? While A&E certainly has a right to dump the most successful cable show in America for being Christian, Christians have a right to respond by refusing to watch A&E. 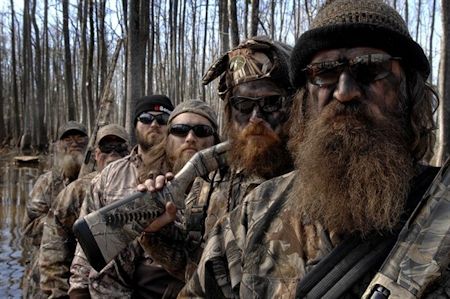 Sources within the close-knit Louisiana clan say they are convinced A&E are manipulating the controversial situation to bring them — and particularly Robertson — back into line after Television executives grew tired of the family pushing their deeply-held, Christian beliefs.

They also think the network could have done something to stop the controversial GQ article being made public, because an A&E representative was present during the interview with patriarch, Roberston, 67.

…A source close to the family, who asked not to be named, told MailOnline: ‘You have to ask yourself, why this interview happened and why it ever became public. Someone from A&E was there and was aware of the kind of answers Phil was giving.

‘But despite that, they didn’t ever try to stop it or control it. Instead, they let it hit the headlines and then released a statement condemning it.

‘It is our belief that they knew what was going to happen and then used the situation to exercise control over Phil.

‘It is our understanding that when the TV executives came up with the concept for the show they wanted it to be a case of people laughing at a bunch of backward rednecks.

‘But when it didn’t turn out like that and people actually started identifying with the way the family behaved and were laughing with them, not at them, they became uncomfortable. It did not sit will with the New York TV types.

‘We believe they were also uncomfortable with the family’s insistence that there would be a strong religious presence in the show. They knew Phil was the driving force behind this and we think they have used this situation to bring him in line so they could steer the show back down the path they originally intended for it.

‘But they may have underestimated how united the family are and how committed they are to their beliefs. They also didn’t realize how much support Phil would get from the public, so things have backfired on them.’

Is that possible? Well, I doubt the interview was a set-up, but I can certainly imagine a bunch of left-wingers at A&E infuriated because the show was too Christian for their liking and thinking they could turn this incident to their advantage to kill all references to Christianity on the show.

If that’s what they were thinking, then they have another think coming.