Sharia is incompatible with civilization and listeners to the radio show the Call got a taste of why when a self-identified Muslim caller called in. The caller began by saying, “My opinion is something you’re not going to agree with.” 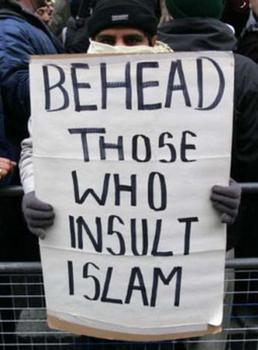 Chris: Hi. My opinion is something you’re not going to agree with.

Chris: I’m Muslim and I believe 110 percent in Sharia law. Sharia law needs to be implemented in the United States because that’s the only way this deviant lifestyle will be corrected. You know what happens in Saudi Arabia and other Islamic countries to the gay people, correct?

Host: Mm-hmm. I don’t agree with it

Chris: They are beheaded, and that I believe –I’m going to fight as hard as I can with all of my brothers and sisters to make Sharia law in the United States.

Host: So people should be beheaded for being gay? I mean, c’mon, this is America!

Chris: This is a sin! No, you don’t like –you’re anti-Muslims?

Host: I’m not anti-Muslims, but–

Chris: You are anti-Muslims if you’re saying that about my religion.

Host: I didn’t say that. I’m saying about America.

Chris: About my religion? No. In America? We’re Americans too.

Host: You really believe people should be beheaded?

Chris: Yes, of course. Government should do that.

Homosexuality is indeed a capital offense in Saudi Arabia. In Afghanistan, homosexuality is also punishable by death. There, instead of beheading, a wall of heavy stones is pushed over to crush the offender to death.

That sort of primitive barbarism is the rule, not the exception under Sharia, which is why there is no such a thing as a “moderate Muslim” who also supports Sharia.