Liberals like to tout Islam as a bastion of peace and tolerance, but the reality is quite different. Case in point: in Indonesia, a gang rape victim was sentenced to public caning as punishment for being in “close proximity” to a man. 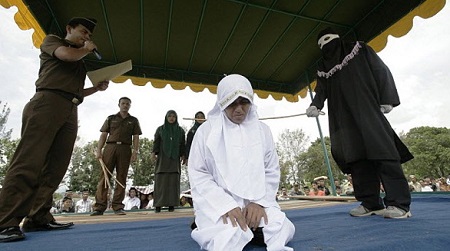 A woman in Aceh who was gang raped last week after being accused of having extramarital sex now faces the indignity of a public caning for the offense of having an affair.

“We want the couple to be caned because they violated the religious bylaw on sexual relations,” Ibrahim Latif, the head of the Shariah office in the eastern town of Langsa, said of the woman and her companion, a 40-year-old married man, who were raided by a group of men last Wednesday night at the woman’s home.

The woman was raped by the eight vigilantes, three of whom have since been arrested. Her companion was tied up and beaten. The pair were also doused with sewage by the attackers, who later took them to the Shariah police, or Wilayatul Hisbah.

This is why the creeping Islamization of the west is such a problem. Islam is far from a religion of peace and tolerance; no, it’s a religion of hatred, misogyny, and violence that cannot be allowed to spread.