Sheriff takes a stand over Duck Dynasty; announces department will no longer assist A&E during filming

The local sheriff in a: Georgia: county where: A&E: has filmed several of its programs has publicly announced the network will no longer receive the assistance of his Sheriff’s Department due to A&E’s “unreasonable” punishment of: “Duck Dynasty”: star: Phil Robertson. 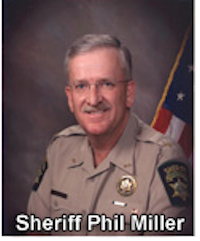 [1]Douglas County Sheriff Phil Miller: posted the following statement on his personal Facebook page Friday announcing his own “business decision, saying, “It is time for someone other than Hollywood and the news media to stand up for what is right!”: Miller said while it was A&E’s “prerogative” to indefinitely suspend Robertson over his comments on homosexuality, his decision to no longer give the sheriff department’s assistance to the network was “what he thought was right to show how he feels,” the: Douglas County Sentinel reported.[3]

According to the Sentinel:

“I guess I need to learn to keep my mouth shut too,” Miller said in a phone interview Friday night. “But they are punishing a man for being honest and answering a question that he was asked. When he answered and gave his understanding, pulling from his Christian beliefs, this happens. It’s not right and I had to say something about it.

“I don’t hate anybody and you can ask anyone who knows me and they will tell you the same thing. But where we are in this country now, where you are punished for simply saying what your understanding of your Christian beliefs are is just too much for me.”

This post was used with the permission of BizPac Review[4].