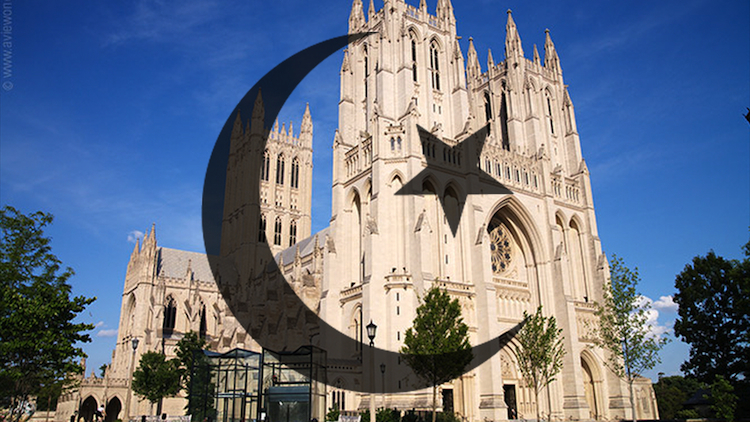 Fools[2]. Remember when al Qaeda and ISIS (who have now merged) said they would see their evil, black flag over the White House? Might as well be drifting in the breeze there – this is a major step towards it. You see, to subjugate Christianity to Islam, negates it in the Islamist’s eyes and this is what has happened when you let the Muslim Brotherhood hold their prayers in a Christian cathedral. It also claims DC as a conquest for Islam. So in fact… just as Obama claimed, they now see the US as a Muslim nation[3]. 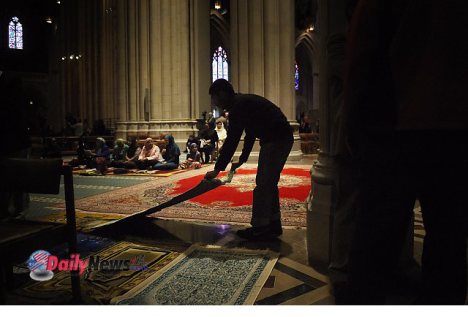 The 100-year old Washington National Cathedral — celebrated as our “National House of Prayer” by Congress — is opening its doors, pews and pulpit to “radical Muslims[5]” who will essentially turn the cherished Episcopal Church into a mosque.

On Friday, for the first time ever, this prominent and powerful symbol of America’s Judeo-Christian heritage will host a Muslim prayer service.

Planners say they hope Friday’s service at the historic cathedral will foster more understanding and acceptance between Christians and Muslims around the world.

The National Cathedral is where America holds very special religious services — funerals for our presidents, like Ronald Reagan, and for our heroes, like Neil Armstrong.

Now, as a piece on investors.com[7] notes, this great church is welcoming into its sanctuary questionable organizers of this first-of-its-kind Muslim prayer event:

Who are these “organizers”? Members of known Muslim Brotherhood front groups, including the Council on American-Islamic Relations and the Islamic Society of North America (ISNA).

The Justice Department has identified both as belonging to the Hamas wing of the radical Brotherhood. It’s also implicated them in a Hamas conspiracy to raise millions for Palestinian suicide bombers.

These co-sponsors of the National Cathedral jumuah (“for invited guests only”) remain unindicted co-conspirators in a major terror case.

An article in the Washington Post[8] informs us that event organizers say they are seeking to make a statement by having Muslim leaders hold their midday service in such a visible and venerable Christian house of worship.

About 100 invited guests will reportedly attend the closed service, which will be spoken and chanted. The Post story says that Muslim leaders will bring prayer carpets.

“We want the world to see the Christian community is partnering with us and is supporting our religious freedom in the same way we are calling for religious freedom for all minorities in Muslim countries,” said Rizwan Jaka, a spokesman with the prominent ADAMS mosque in Sterling, Va., one of the co-sponsors of Friday’s service.

“Let this be a lesson to the world.”

But some are wondering what kind of “lesson” this will actually teach.

As the editorial in Investor’s Business Daily[9] observes, it could well be that Muslim leaders want the lesson to be that Islam’s infiltration into the highest levels of traditional American life knows no bounds…that event organizers are happy to have their groundbreaking prayer service at the Washington National Cathedral for deeply symbolic reasons:

There are few more powerful symbols of our Judeo-Christian culture than the cathedral — and that’s exactly why the Islamists targeted it.

This is blasphemous and a disgrace. Letting the Muslim Brotherhood bow down to Allah where we have held services for our heroes such as Ronald Reagan and Neil Armstrong. It taints all we stand for and embraces our enemies. Even those who died on 9/11 were remembered there and you let those who murdered them worship on this spot? It doesn’t foster more understanding and acceptance – it is one more goal met by the Muslim Brotherhood in their coup within our walls. This is a lesson alright – a lesson that we have Islam in and controlling our government.

There was at least one Christian[11] with a spine – a woman no less[12]. Of course, she was removed. Can’t have free speech in a mosque now, can we? Amid a private, closed service with heavy security, one woman made her voice heard, denouncing the blasphemous rite of allowing Islam to taint our Christian heritage and faith.

Nevertheless, the carefully scripted ceremony was marred once when one well-dressed, middle-age woman in the audience suddenly rose and began shouting that “America was founded on Christian principles. . . . Leave our church alone!” She was swiftly ushered out by security aides, and the service continued.

The Rev. Franklin Graham, who heads the Billy Graham Evangelistic Association, said that it was “sad to see a church open its doors to worship of anything other than the One True God of the Bible.” As of late Friday, 64,000 people had “liked” the post. So, you see… Christians are paying attention and they no likey. Thousands should have turned out to protest that service. Shame on us. “America’s House of Prayer” has been claimed by Islam and Americans are too blind to see it[14]. More from Graham:

Graham, who heads the Billy Graham Evangelistic Association and Samaritan’s Purse, said, “Tomorrow, the National Cathedral in Washington, D.C. – one of the most prominent Episcopal churches in America – will host a Muslim prayer service to Allah.”

“It’s sad to see a church open its doors to the worship of anything other than the One True God of the Bible who sent His Son, the Lord Jesus Christ, to earth to save us from our sins,” said Graham. “Jesus was clear when He said, ‘I am the way the truth and the life. No one comes to the Father except through Me’ (John 14:6).”

Lest you think this is sheer suicidal lunacy just from the Leftists, think again. The Leader of the House, John Boehner, allowed an Imam to say a prayer on the House floor Friday[15]. I guess it was to compliment the service at the Cathedral. Another fool subjugates our leaders to Islam and America barely notices. What is wrong with these people?

Newly re-elected Speaker of the House John Boehner (who was elected by secret ballot, no less), presided and bowed his freaking head, while the Imam for the Islamic Center of Central Jersey praised Islam’s Allah from the House floor as the God who reigns supreme. What? Is the entire political leadership of the US now converted to Islam?

Imam Hamad Chebli didn’t just appear at the House floor; he also delivered Islamic prayers at the National Cathedral which was prepared for Muslim prayers with rugs. One wonders if a statue of Baal were placed on the House floor, if Boehner would have prostrated himself before that demon as well.

Chebli is no harmless man of faith:

Early in his studies, a teacher named Hassan Khaled chose Chebli to serve at a neighboring mosque. Nearly four decades later, Chebli laughs as he recalls the puzzled expression of the mosques members when a lanky boy in glasses came to lead their prayers …[Hassan] Khaled, his mentor, was chosen Grand Mufti of Lebanon, the nations foremost Islamic legal scholar in the Sunni Muslim sect.”

Did you know, Chebli’s mentor, Khaled, who was the Mufti of Lebanon was “martyred” after a bomb was set up which killed him and others? His father was also “martyred” by a bombing. This is the monster saying prayers on our House floor and in our nation’s prized cathedral. Chelbi also traveled to Egypt to study at Al-Azhar University, the world’s oldest university and center for Brotherhood jurisprudence. It was during this time that Chelbi’s mentor Khaled was chosen as the nation’s foremost Islamic legal scholar[16] in the Sunni Muslim sect. Chebli and his mentor are cut from the same terrorist, Brotherhood cloth. 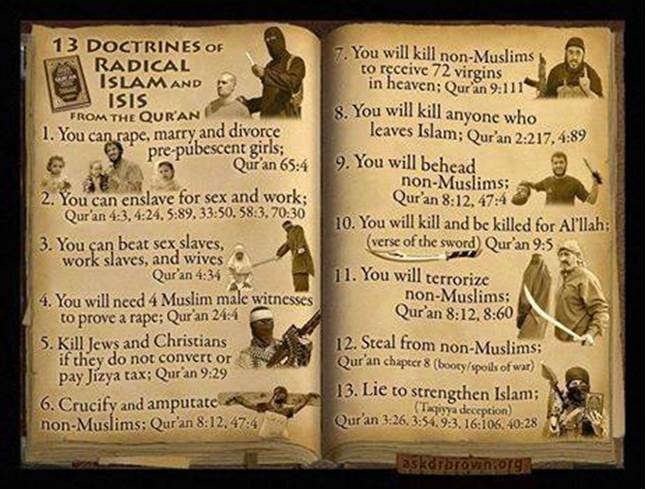 Friday was a historic day[17] in the conquest of America for Islam. Creeping Shariah reminds us of what was said by the Religious Freedom Coalition’s William Murray[18] on September 14, 2001, just three days after the 9/11 attacks, when President George W. Bush stood shoulder to shoulder with Siddiqi, the leader of the largest Muslim Brotherhood group in the U.S. and prayed with him in the National Cathedral:

As the service closed I felt the chill of the presence of the awesome power of God. I was clearly reminded of the very first of the Ten Commandments, THOU SHALT HAVE NO OTHER GODS BEFORE ME (Exodus 20:3). The National Cathedral had been defiled by prayers to a pagan moon god, Allah. Our Christian President had bowed his head to prayers offered to other gods, prayers that may have been for those who would destroy our nation and enslave our children to an alien religion. At that moment the hand of protection of the true God was removed from our nation.

Since the Jihad attack on the United States on September 11th the President has surrounded himself with and sought advice from radical Islamic leaders who have openly called for the violent overthrow of the government of the United States. In addition, the President has invited six of the seven Islamic nations known to sponsor terror into his “coalition against terror”.

By late Friday it became apparent to me that our nation was in fact not going to fight a war on terrorism, but rather follow the same old track of “punishing those who actually committed the crime.” This was not a “crime;” it was an act of war.

It was indeed an act of war, but instead of fighting our enemies, we seem to have surrendered to them in a bloodless coup within our own halls of power and leadership.

America, these are the people that killed thousands on 9/11[20]. They have spilled the blood of our sons and daughters in war theaters in the sand-ridden hellholes that worship a foreign god and our leaders bow before them. Enough! Islam is an evil, broken philosophy that enslaves and slaughters. It has no place in our government or our churches. It is not a Christian thing to bring them into the House of the Lord – it is a repudiation of our faith and a submission to Allah. There are good Muslims, I’m sure, but they follow a broken faith.

Where are our Christian leaders? Are you so fearful of political correctness and being called names that you will not come forward in the name of God? If so, you are really no Christian at all. Do you really think there will not be a reckoning for our inaction? For our spineless submission? For our blindness in the face of such evil? What happened Friday was obscene and an abomination[21]. The subjugation of Christianity and America to the Muslim Brotherhood and Allah seems to be acceptable to America — not so much in the eyes of God and America will pay a very high price for it.