Ted Cruz, Sarah Palin and Bobby Jindal All Stand Up For Phil Robertson

Republican politicians are not a particularly courageous lot. As often as not, they give in the first time they’re challenged. Of course, there are a few exceptions and they’re standing up for Phil Robertson’s right to express his Christian beliefs. 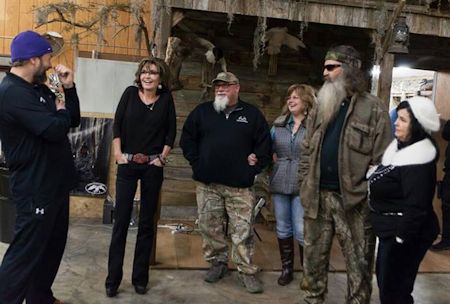 It’s no surprise that one of them is former vice-presidential nominee Sarah Palin.

Free speech is an endangered species. Those “intolerants” hatin’ and taking on the Duck Dynasty patriarch for voicing his personal opinion are taking on all of us.

Additionally, when you think of political courage in the Senate, the first name that comes to mind is Ted Cruz and he did not disappoint[2].

The reason that so many Americans love Duck Dynasty is because it represents the America usually ignored or mocked by liberal elites: a family that loves and cares for each other, believes in God, and speaks openly about their faith.

If you believe in free speech or religious liberty, you should be deeply dismayed over the treatment of Phil Robertson. Phil expressed his personal views and his own religious faith; for that, he was suspended from his job. In a free society, anyone is free to disagree with him–but the mainstream media should not behave as the thought police censoring the views with which they disagree.

And, as PC enforcers often forget, tolerance is a two-way street.

Last but not least, Louisiana Governor Bobby Jindal unhesitatingly jumped into the fray as well[3].

The politically correct crowd is tolerant of all viewpoints, except those they disagree with…In fact, I remember when TV networks believed in the First Amendment. It is a messed up situation when Miley Cyrus gets a laugh, and Phil Robertson gets suspended.

In a time when so many Republican politicians have proven that they don’t have spines, courage matters. Thank you Sarah Palin, Ted Cruz and Bobby Jindal for standing tall when it matters.

THE END OF DUCK DYNASTY? The Robertson Family: If Phil Goes, We All Go.[4]