Militant atheists are at it again, railing against any public display of religion because it hurts their poor little feelings. But they should have thought twice before demanding that a cross in this town get taken down. 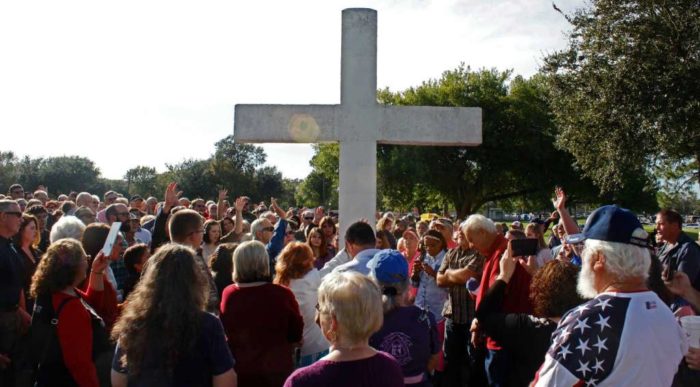 The Freedom From Religion Foundation threatened to sue the City of Port Neches unless the cross was taken down.

The FFRF sent a letter to Port Neches Mayor Glenn Johnson last November, stating it has been contacted by a “concerned citizen” about the presence of the cross on public land.

“The government’s permanent display of a Latin cross on public land is unconstitutional,” the group contended, citing various court precedent. “The display of this patently religious symbol on public property confers government endorsement of Christianity, a blatant violation of the Establishment Clause.”

“We ask you to remove the cross from Port Neches Riverfront Park immediately or direct the display [to] be moved to a more appropriate private location,” the letter said.

The citizens of the community rallied to the cause of keeping the cross, with hundreds placing white wooden crosses in their lawns.

In announcing its sale of the land to the First United Methodist Church, Port Neches City Attorney Lance Bradley told 12 News Now, “We found a section in the local government code that allows the sale of property to a religious organization, as long as that organization owns land within the municipality and there’s an agreement to revitalize that land.”

“I don’t think we’d categorize it in any particular manner,” said City Manager Andre Wimer. “We looked at a number of options and this is the direction that city council decided to proceed.”

The FFRF is calling the city council’s decision a “victory,” but plan to investigate the sale price of $100 further.

“The action to remove the Christian symbol from the public park is certainly a step in the right direction,” attorney Rebecca Markert told local television station KDFM. “FFRF will be looking into the details of the land sale to ensure the law was followed. If it is determined that the sale did not go through the proper process and the purpose was to save a religious symbol, then it’s not a closed case.”

Of course they’re not satisfied — they won’t be until people can’t openly practice religion. When will they figure out that this goes against everything this country was built upon?