The suspect charged by French police with the murder and decapitation of his boss, a delivery service owner, was thought to be a “normal French Muslim” by his wife, reports say. Now the suspect tells police that he is a member of the ISIS terror group. 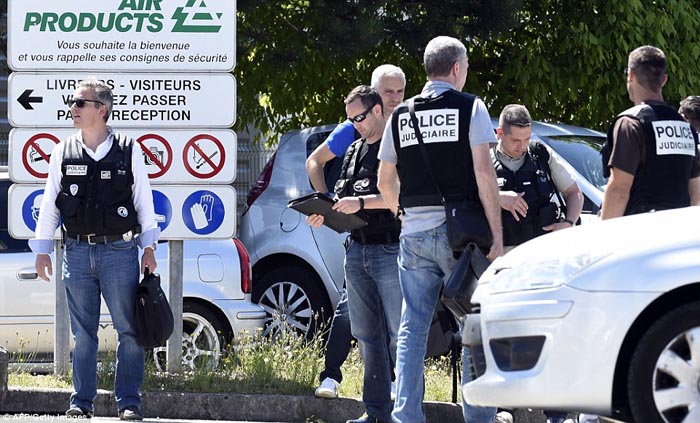 The attack took place at the French HQ of American-owned Air Products close to Lyon in southern France. Suspect Yassine Salhi murdered his boss then took his body to the company where he decapitated the body and impaled the man’s head on the factory’s fencing.

Then in a suicide attempt, the suspect drove his car into some gas canisters causing a small explosion, but one that didn’t do wide spread damage.

The suspect’s wife insisted that she was shocked by the whole thing[1] because she thought he was just a “normal Muslim.” … and perhaps, in the end, he is!

Heavily armed police investigating this morning’s brutal terror attack in France have removed a woman and child from the home of Yassine Salhi – the suspected Islamist accused of beheading his boss and trying to blow up an American-owned gas factory.

Police swooped on the apartment building in Saint-Priest, near the city of Lyon, just hours after the 30-year-old delivery driver was arrested on suspicion of decapitating his boss, writing Arabic slogans on the severed head and hanging it on a fence outside the nearby headquarters of Air Products.

Salhi is accused of going on to crash his Ford Fusion delivery van through the factory’s gates before crashing it into several large gas cannisters left in the car park, apparently in the hope they would explode and destroy the entire factory complex.

The murdered man – who French media say owned the delivery company Salhi worked for – is believed to have been killed elsewhere before his corpse was dumped at the factory site in Saint-Quentin-Fallavier and his head impaled on a fence 30 feet away surrounded by homemade Islamist flags.

Speaking before the raid on her home, Salhi’s wife described her husband as a ‘normal Muslim’ who left for work as usual at 7am this morning. ‘My heart stopped when I heard he was a suspect….I expected him this afternoon,’ the unnamed woman told French radio station Europe 1.

Salhi – who is understood to have been known to security services since at least 2006 – reportedly told arresting officers that he is a member of the Islamic State terror group. He is believed not to have a criminal record and an investigation into his ‘possible radicalisation’ was dropped in 2008.

Is it “normal” for Muslims to want to murder and destroy?