The World’s Supposed To End On May 21?

This week-end, when I was in D.C., there were a surprising number of ads around the city proclaiming that the Bible says the world’s going to end on May 21. 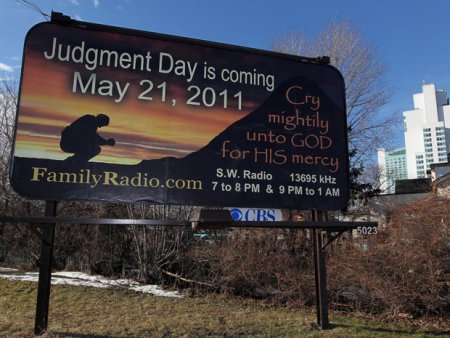 Of course, the Bible doesn’t say the world is going to end on the 21st. In fact, the guy predicting it has already gotten it wrong before[2].

…The founder of Family Radio, Harold Camping, reportedly came up with the May 21 date based on a mathematical formula he created one night.

The original researchers who looked at this issue believed people would disregard facts if it conflicted with deeply held beliefs. Instead of accepting facts, the theory predicts people will find ways to verify what they already feel.

“They typically blame themselves that they caused this not to occur and so they’ve got to do better,” said James Richardson, a noted expert on religious movements from the University of Nevada.

Mr. Richardson said it’s easier to accept failure when numbers are involved, such as in this case.

Mr. Camping’s math has been wrong before. The preacher’s followers gathered in an auditorium on Sept. 6, 1994, the day Mr. Camping predicted the rapture. Despite nothing happening, Mr. Camping’s following has continued to grow.

“I understand that other people have been wrong, but the fact is that eventually God is going to revisit us,” Mr. Garcia said.

Mr. Richardson said there’s nothing to worry about – he believes the world will still be turning on May 22. “I want to see someone interviewing these folks on May 22,” he said. “I think they’ll still be around.”

First of all, let me just note that if you’re planning to try the old, “This may be our last night on earth” line on May 20th, that’s morally wrong! Just pointing that out.

Beyond that, what happens to people — and this works with conspiracy theories, too — is that the people who buy into this are told over and over again that they’re wrong — but, they hang in there and believe anyway. Eventually, they get to the point where their self-image gets heavily tied up in the prediction being right and then, when inevitably it turns out to be wrong, they’ll buy pretty much any excuse because it’s easier to do that than admit that all those people who called them gullible were right.

Here’s what I’d say about that; Everybody’s wrong sometimes. If you get new information that proves the old information you have is wrong, it’s wise to change your mind. For example, if someone predicts the world is going to end of the 21st of this month — and it doesn’t — then, don’t buy their excuses.