We don’t know who actually first said, “One man with courage makes a majority,” but it certainly does apply to high school student Roy Costner IV, who spoke up on behalf of God at Liberty High School in South Carolina[1]. 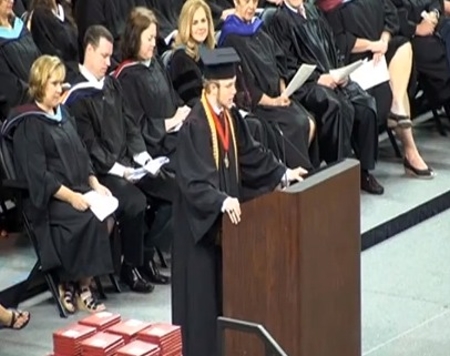 Roy Costner IV, a former public school student from South Carolina, stunned the audience at his high school graduation last weekend when he ripped up his previously-approved valedictorian speech, going on, instead, to speak about God – and then deliver the Lord’s prayer.

The act, which drew loud applause, was taken in opposition to the School District of Pickens County’s decision to axe prayers from graduation events, Christian News reports. Officials said that they had recently received complaints from atheist activists and church-state separatists, leading to the removal of invocations from all school events.

But that didn’t stop Costner.

The Liberty High School ceremony is already making its way into national headlines, as the valedictorian’s actions and the subsequent cheers this past Saturday were caught on video.

As he spoke, Costner went from merely mentioning “the Lord” to jumping right into the well-known prayer.

“Those that we look up to, they have helped carve and mold us into the young adults that we are today. I’m so glad that both of my parents led me to the Lord at a young age,” he said. “And I think most of you will understand when I say —”

And that’s when he commenced the popular invocation.

“Our Father, who art in Heaven, hallowed be Thy name,” Costner continued. “Thy Kingdom come…”

Throughout the entirety of the prayer, cheers and clapping raged. The school district, which, as stated, was already facing scrutiny over graduation prayers earlier this year, has no plans to punish the former student for his actions (after all, he’s no longer under their authority, so what retribution could he receive?).

That’s someone who was raised right, which is more than can probably be said about the scumbag atheists who complained in the first place or the gutless school district that caved to them. More Americans should follow Roy Costner’s example and stand up, speak out and fight the power!