Phil Robertson is a man of principle and faith. He is endorsing his nephew, Zach Dasher, for Congress. Belief in God and the Constitution run in their family and souls — Dasher is Tea Party and in my book is the candidate to vote for. He’s running against incumbent Republican Vance McAllister in the Louisiana “jungle primary” for the 5th Congressional District seat. Louisiana needs to vote Dasher as the Robertson clan stands for God and country[1]. 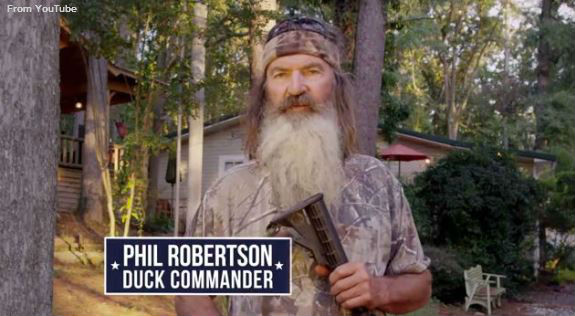 No one should be very surprised to learn that Duck Dynasty patriarch Phil Robertson is endorsing his nephew, Zach Dasher, for Congress.

Like previous statements from the outspoken Christian conservative, Robertson’s expression of his unabashed support for the First and Second Amendments in a recent political ad may put a few liberals off, however.

Dressed in his usual camouflage, Robertson appears in the 15-second spot holding what liberals would call an “assault rifle” and a well-worn Bible.

Dasher, a Republican and tea party favorite, is running against incumbent Republican Vance McAllister in the Louisiana “jungle primary” for the 5th Congressional District seat.

Palin and Cruz are now endorsing as well[3]:

Dasher has other high-profile endorsements as well. Sen. Ted Cruz also recorded a video endorsement, seen here[4]. Like Phil Robertson, Cruz urges Pelican State voters to pull the lever for Dasher. “Zach Dasher is a conservative with a backbone to stand up to career politicians in both parties to help lead the fight to repeal Obamacare, to stop amnesty, defend our conservative values and turn our country around,” Cruz argued.

Gov. Sarah Palin and the Family Research Council’s Tony Perkins (a Louisiana native) have also endorsed Dasher, completing a pretty impressive who’s who list of the conservative movement to highlight the race in the 5th congressional district.

Time to return to founding principles and what this great nation was built on in the first place. Who gives a crap if the Left or the Progressives on the Right have an embolism over Dasher? That just makes him even better in my book. I endorse and stand with Dasher and the Robertsons. You’re in the “jungle primary” now Louisiana… send the liberals on both sides of the aisle packing. Got tea?