Why exactly would a Halloween costume celebrating Osama Bin Laden’s death be traumatic to anyone at an American university[1].? If the idea of Osama Bin Laden getting shot upsets you, maybe it’s a sign we should be a little worried about you instead of bending over backwards to accommodate you because of political correctness. 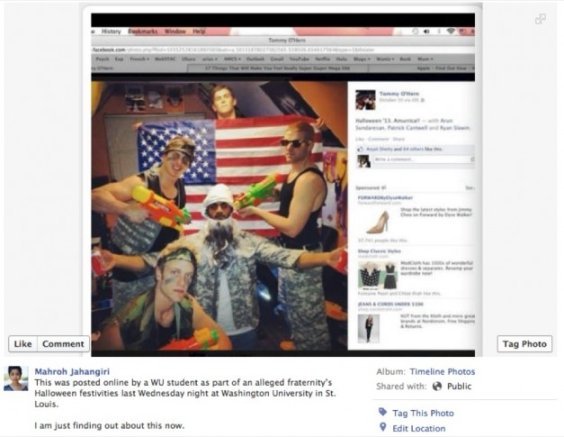 The Muslim Students Association (MSA) would like to issue a statement in regards to a Halloween image shared on Facebook on October 30. Some members of our Muslim community were deeply affected by the content of the photo, and many were negatively impacted by insensitive and bigoted comments that followed. As the Muslim Students Association, we aim to provide a safe space for Muslims at Washington University; however, we cannot do this independent of student culture and administrative support. To that effect, we are invested in moving forward from this incident in a way that is both healing and productive for Muslim students, other minority students, and our larger Washington University community.

Last Thursday, MSA hosted a solidarity forum during which Muslim students were given a platform to relate their experiences with Islamophobia on campus and discuss the ways in which they were triggered by this recent incident. It was truly heartwarming to see so many friends and allies show their love and support during the forum, and MSA is deeply grateful towards all who attended. However, insights from the forum have made it strikingly clear that there is a woeful lack of resources and support services for Muslim students to utilize during times of need. The need for a Muslim chaplain, a religious authority figure who can serve as a spiritual resource and to whom students can turn to in times of need, is highly evident. In a similar vein, it appears fitting to establish a space on main campus in which Muslims students can not only congregate to pray and fulfill their daily religious duties, but also seek refuge and build community. We are painfully aware of how small our community is and implore the administration to include representation of Islamic religious services/events alongside other religious groups in admissions, prospective students’, and orientation literature.

One of the greatest lessons Islam teaches us as Muslims is the importance of forgiveness and mercy. As such, MSA is not seeking punitive measures against the individuals in the photo in question nor do we support further mobilization around the photo itself.

It’s a good thing that the Muslim Students Association isn’t “seeking punitive measures against the individuals in the photo in question” since it’s hard to know what those measures would be. Did they win some kind of best Halloween costume award that the MSA wants taken away? Incidentally, if you view Halloween costumes celebrating the death of Osama Bin Laden as “Islamophobia” that takes you outside of your “safe space,” then maybe the rest of us aren’t in a “safe space” around you.