18 year-old Ezra Schwartz[1], who went to Israel to study at a seminary and perform community service, was gunned down by terrorists in route to the West Bank to bring food to Israeli soldiers. He was American and his body was flown back to his family in Sharon, Massachusetts. Hundreds of Israelis came to say goodbye and grieve his death. They stood in a circle, with arms over each other’s shoulders and sang farewell to a young man that everyone loved. They sang the national anthem of Israel in his honor and memory. He should not have been taken so soon. When I saw this, I wept, not just for Ezra, but for all the innocent people who have perished at the hands of evil terrorists that the world seems all too willing to tolerate and elevate. 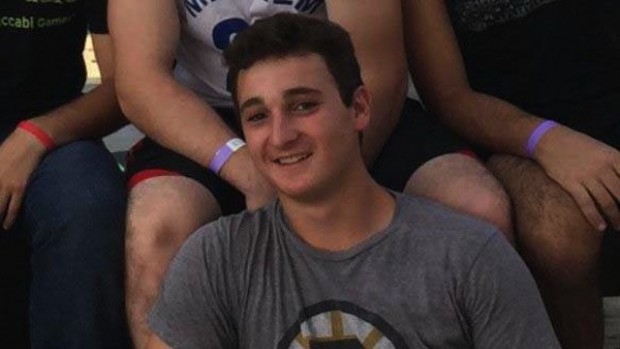 Hundreds descended on Ben-Gurion Airport outside Tel Aviv to pay their respects Saturday night to an American teenager killed in a Palestinian terrorist attack last week while he was delivering food to Israeli soldiers.

The mourners gathered in a circle, arms over shoulders, and sang Israel’s national anthem in memory of Ezra Schwartz, the 18-year-old Massachusetts native who chose to spend a year before college in a program that combines studying at a Jewish seminary with community service.

In the middle of the circle they placed a Bible, an Israeli flag, a New England Patriots jersey and a bottle of his favorite soft drink — Apple Schweppes, Haaretz reported[3]. 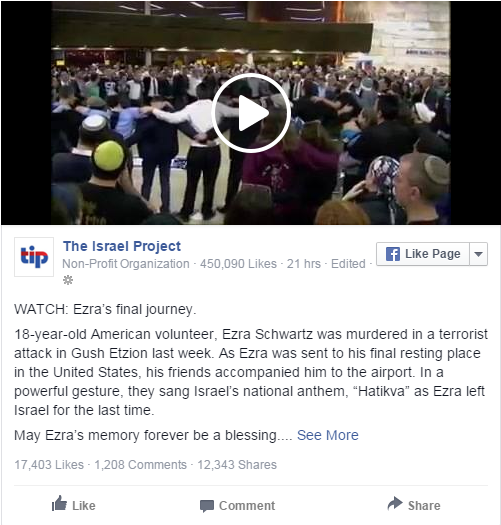 Schwartz’s body was flown back to his family in Sharon, Massachusetts for burial.

The American student was killed Thursday when he and his classmates traveled to the West Bank, just south of Jerusalem, to bring food to Israeli soldiers and to visit a memorial for three Israeli teens around his age who were kidnapped then killed last summer by Hamas militants, the Times of Israel reported[5]. 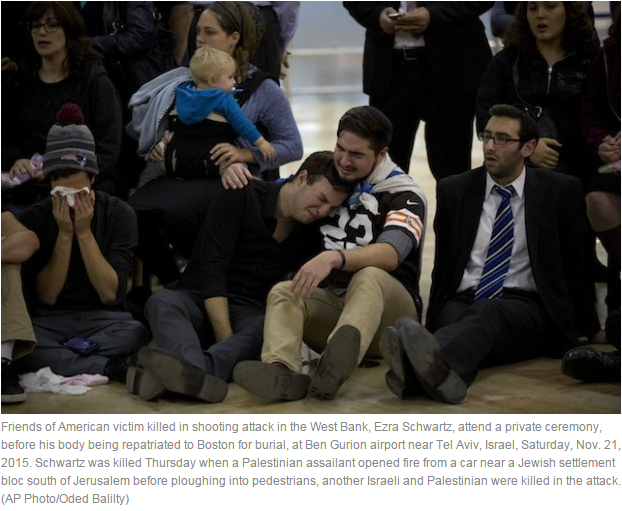 A Palestinian man using an Uzi machine gun shot and killed Schwartz and two others while their minivan was stuck in traffic.

Hamas spokesman Hussan Badran praised the attack[7], which also killed an Israeli and a Palestinian, describing it as “an act of bravery.”

“He was the kind of person who would invest hours in others, who would go out of his way to sit with a kid who was struggling. I wasn’t surprised to hear that he was volunteering to distribute food to lone soldiers — it fits who Ezra was and always will be,” Tibbetts said.

Aliza Abolafia who served as a counselor at a Jewish summer camp in New England told the Times of Israel, “Ezra was always asking me how he could do better, and he was always checking up on even the quietest camper.”

This past summer he was chosen as “Outstanding Counselor.”

“He brought warmth and silliness to every room that he entered,” Abolafia said, adding that he had been a “notoriously mischievous camper” when he was younger.

Former schoolmates at the Maimonides School outside Boston told the Israeli news site that he had served as captain of the baseball team.

“Even though he was one of the shortest guys on the field, he was probably the toughest guy I have ever known. He did the dirty things like diving for grounders or sliding into home plate. He was such a joy to be around every day,” former teammate Zachary Blitstein told the Times of Israel.

As they gathered to bid goodbye to an amazing young man, they placed a Bible, an Israeli flag, a New England Patriots jersey and a bottle of his favorite soft drink — Apple Schweppes in the middle of their circle. I think Ezra would have loved that gesture. Ezra was cut down while riding in a minivan by a Palestinian monster wielding an Uzi. I have no idea if they got the guy or not. Hamas called it an act of bravery. It wasn’t – it was murderous cowardice. Ezra was visiting a memorial for three Israeli teens around his age who were kidnapped then killed last summer by Hamas militants when fate came calling. He was by all accounts funny, gifted, kind and devout in his faith. So many will miss him. Perhaps it is un-Christian of me to say this, but I hope they track down whoever did this and send him to hell where he belongs, if they haven’t done so already. My prayers are with Ezra’s family – another good soul has been taken from us in the name of terrorism and hate.