For eleven years, Muslims have gathered at the Texas capitol to meet with legislators. And for the first time this year, protesters showed up too, including one woman who wrestled the microphone away to decry the “false prophet Mohammad”. 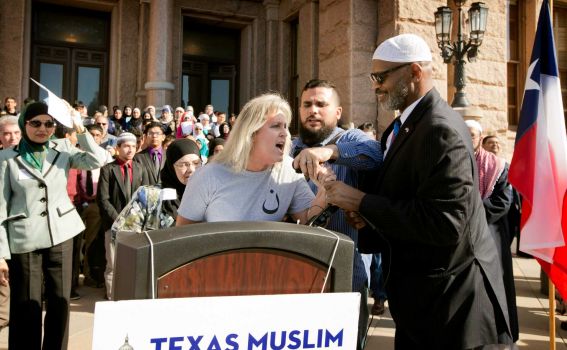 The 11th annual Texas Muslim Capitol Day in Austin was interrupted on Thursday by an angry protester who grabbed the microphone and decried the “false prophet” Mohammad and the religion of Islam.

“The false prophet Muhammad!” the woman is heard screaming. “Islam will never dominate the United States and by the grace of God it will not dominate Texas.”

… The Texas Tribune also reported that Muslim attendees were interrupted as they sang “The Star-Spangled Banner.” Some protesters reportedly yelled, “Islam is a lie!” and “No Sharia here!”

This may not have been the best way to protest, considering that this woman mostly just came across as a lunatic. What she was saying may have been true, but there are smart and dumb ways to protest and get a point across, and this? Wasn’t the smart way.