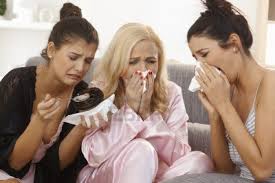 [1]Poverty, violence and other issues aside, women everywhere are focused on being depressed after hearing the “anti-woman” ruling of the U.S. Supreme Court in: Burwell v. Hobby Lobby Stores, Inc.and: Wheaton College v. Sylvia Burwell: last week. Hobby Lobby and Wheaton College became embroiled in litigation due to Obamacare’s requirement that for-profit employers provide abortifacients to employees, despite their owners’ Christian beliefs. As we all know, there is no issue or right more important to women everywhere than to force all employers to subsidize their use of abortifacients.

It doesn’t matter that women can easily buy the abortifacient Plan B over the counter inexpensively for $50 without a prescription. It doesn’t matter that Planned Parenthood provides abortifacients and birth control free to low-income women. Justice Ginsburg, in her dissent to the Hobby Lobby case, righteously declared, “It bears note in this regard that the cost of an IUD is nearly equivalent to a month’s full-time pay for workers earning the minimum wage.”

Five Catholic and mostly white men on the Supreme Court just perpetuated sexism, misogyny and chauvinism into the 21st century, according to three dissenting and caring feminists on the court (never mind that one of them, Justice Kagan, is Catholic too). The War on Women has ratcheted up one notch. Women have never been so oppressed. Ginsburg stated in her dissent that the: Hobby Lobby: majority decision puts women “into a minefield.” Without employer-covered abortifacients, they may as well be in live combat on the battlefield!

Women want their employers to care about them having sex; translated, they need them to pay for their abortions. Feminists have long railed that government should get out of the bedroom, but they understand that rhetoric doesn’t always translate into reality. Women shouldn’t have to be responsible for their own choices to have sex and then abort the babies. That financial cost should all belong to their employers. As Ginsburg correctly said in her: Hobby Lobby: dissent, “Those interests are concrete, specific, and demonstrated by a wealth of empirical evidence.”

Of course we all know – feminists better than the rest of us – that women really can’t take care of themselves. The feminist movement has made sure women are increasingly: dependent: on the government, in order to make sure there is no chance they are dependent on their husbands. Now, the feminist movement is taking that dependency a step further, by making women dependent upon their employers too.

It: doesn’t matter: that Hobby Lobby and Wheaton College both subsidize birth control, that really doesn’t go far enough. Hobby Lobby needs to subsidize abortifacients too. It will help eliminate the stigma and guilt of aborting a child to have government make your employer subsidize your abortion. It will also decimate any pesky Christian objections to abortion. It would be better not to debate Christians over this, easier just to force them to comply. Caring women, represented by our three feminist justices, want to have Christian values stamped out of not just public life, but the private sector as well, and this is a good place to start.

Little Sisters of the Poor, a home for the elderly run by Catholic nuns in Denver,called: the Obamacare requirement for employers to cover abortifacients, “onerous penalties or becoming complicit in a grave moral wrong.” They must be confused. Even though nuns are celibate, it is still extremely offensive to women that they would not even have the option of getting their sexual activity paid for by their employer.

It really doesn’t matter that more girl babies are aborted than boy babies. Since they are never born, they don’t get an opinion. Women’s equality doesn’t extend into the womb; certain women are better or “smarter” than others and get to speak for all women. Just like conservative women, unborn women don’t deserve a voice as women.

It comes down to this: there are two important goals at hand here. The first is to subsidize women in any way they differ from men, especially in ways where they can control men, such as controlling their offspring. The second goal is to stamp out religion – especially Christianity – everywhere. All women resent men and religion and refuse to acknowledge differences of opinion among their gender. Feminists speak in terms of “women this” and “women that,” instead of “liberal women” or “feminists.”

Are we going to allow women to have differing opinions on contraception and abortion, or are we going to be one monolithic voice squelching all opposing viewpoints? It doesn’t matter if you find abortion morally wrong, other people are responsible for paying for women’s abortions, not them or Planned Parenthood. Anyone who doesn’t agree – even if you’re a woman – is a part of the War on Women.

Children are starving overseas, people are executed every day for their religious beliefs, but none of these issues are as important as funding women’s abortifacients. If you don’t believe this, remember that employers who don’t provide these low-cost abortifacients – which can be easily obtained free from Planned Parenthood – are essentially forcing women into armed combat, nothing less. If you don’t understand this, you’re probably not very smart, don’t care about women’s rights, and are being told how to think by a man.