Republican In Congress: The Votes Are There In The House To Impeach Obama

Republican Congressman Bill Flores (TX-17)[1] has roughly the same take on the chance of impeaching Obama that I do. 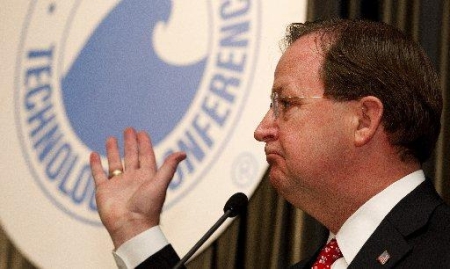 “I think [President Obama has] abused his power, but at the end of the day you have to say, if the House decides to impeach him, if the House had an impeachment vote, it would probably impeach the president,” the Texas Republican said at a town hall yesterday. But Flores cautioned supporters of impeachment that it would fail in the Senate. Not only would Senate Democrats not move to oust the president, but he wasn’t sure if all Republicans would support the effort either.â€‹

“If you try and fail, are you willing to put Nancy Pelosi back in the speakership? I’m not,” Flores said.

Put another way, the GOP could get enough votes to impeach Obama in the House, but not only would it fail to make it through the Senate, wimpy Republicans like John McCain and Lindsey Graham would bail on it and it would turn into a political debacle. Sadly, that sounds about right.