I believe what Ted Cruz is referring to[1] here is who Donald Trump would possibly nominate for the Supreme Court. He obviously does not believe that Trump would put forth a constitutional originalist in the form of Justice Scalia. I have my doubts as well. Trump seems too moderate on some issues and I fear that his choices for the Supreme Court would leave us open to the Constitution being taken apart piece by piece and the nation being reformed under a Marxist doctrine. The first right to go would be the Second Amendment. So, in this regard, I absolutely agree with Cruz. It is a very clear and present danger. We must elect a constitutional president to ensure a constitutional Supreme Court. 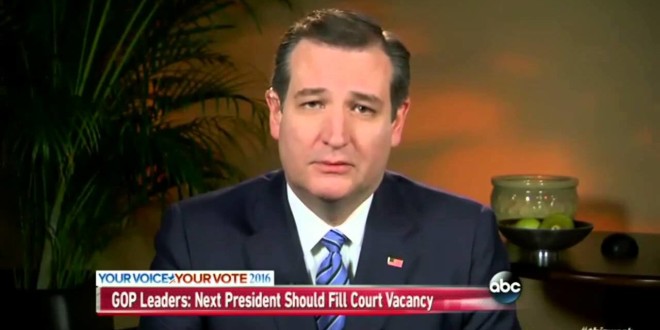 Sunday on NBC’s “Meet the Press,” Republican presidential candidate Sen. Ted Cruz warned if his opponent Donald Trump wins the presidency, the Second Amendment could be “written out of the Constitution.”

Cruz said, “We ought to make the 2016 election a referendum on the Supreme Court. I cannot wait to stand on that debate stage with Hillary Clinton or Sen. Bernie Sanders and talk about what the Supreme Court will look like depending on who wins. If Hillary Clinton or Bernie Sanders wins, or for that matter if Donald Trump wins whose record is indistinguishable from them on a great many issues, then we will see the Second Amendment written out of the Constitution. Another thing we’ll see, and this is very relevant, for conservatives in South Carolina, if Donald Trump is the nominee, or if Hillary Clinton is the president, we will see unlimited abortion on demand throughout this country. Partial birth abortion, taxpayer funding, no parental notification. And we’ll also see our religious liberty torn down, basic rights.”

Ted Cruz has warned over and over again that we are one Justice away from a liberal Supreme Court. Right now, after Scalia’s passing, we are facing that nightmare and we will have to fight Obama to keep a nominee from being seated until the next president is elected. That next president will wind up nominating three to four Justices. One wrong choice and we will wind up losing our fundamental rights and our Constitution will be gutted. Ted Cruz memorized the Constitution when he was 13. He is an acclaimed constitutional attorney and has lived and built his career on that premise. Donald Trump has never even read the Constitution as far as I know. Perhaps it just wasn’t important enough to him to study it. We need a president who knows our founding documents inside and out and adheres to founding principles to set our nation right once more. Ted Cruz is that man.