Courtesy of Gateway Pundit comes welcome news:[1] There are now recall attempts beginning against both John McCain and Jeff Flake in Arizona over their support for amnesty. 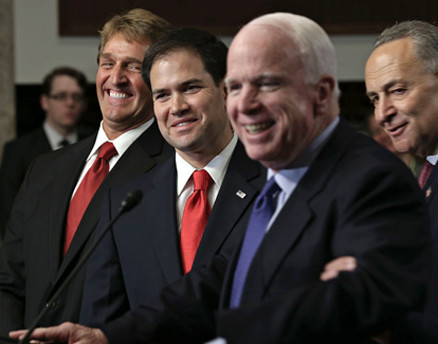 The website even has an easy name to remember —: SenatorJeffFlake.com[3]

Senator Flake is Failing Arizona!
**: Senator Jeff Flake is not representing Arizona voters, conservatives, or American citizens, even though he is our employee and ran under the Republican ticket.
**: Jeff Flake is voting as if he were employed by foreign nationals who have invaded the USA, aka illegal aliens, rather than his Arizona constituents.
**: Jeff is showing us his true colors- he is as blue as they come, a Rhino, a Liberal Democrat in everything but official party designation.

“Every public officer in the state of Arizona, holding an elective office, either by election or appointment, is subject to recall from such office by the qualified electors of the electoral district from which candidates are elected to such office. Such electoral district may include the whole state. Such number of said electors as shall equal twenty-five per centum of the number of votes cast at the last preceding general election for all of the candidates for the office held by such officer, may by petition, which shall be known as a recall petition, demand his recall.”

And this is from shameless Senator John McCain’s: recall page[4]:

Do you remember this? McCain’s “Complete the Danged Fence”? In June 2013, McCain showed us his true colors and voted against building the 700 mile-long fence (that was required by previous law in 2006).

Men like John McCain and Jeff Flake don’t respect conservatives, they don’t keep their word and they care less about the American people than they do the criminal enterprises that fill their campaign coffers in return for their support for amnesty. The only way men like McCain and Flake will do the right thing is if they think there’s a possibility that they’ll lose their cushy jobs if they don’t.

That, they understand. So, if the people of Arizona can recall Flake and McCain, they should do it.