Boehner Increases the Debt Ceiling by $1.5 Trillion in a Symbolic Flip-Off on His Way Out

In a parting middle finger gesture towards conservatives[1], John Boehner has caved to Obama and is raising the debt ceiling by $1.5 Trillion and increasing spending by at least $80 billion over the next two years. He’s given Obama a blank check to spend during his time left in office. How thoughtful. The House has the power of the purse and Boehner has all but turned that over to Obama willingly and knowingly. He claims to have secured future spending cuts which will never, ever happen. Some Christian Boehner is… what a hypocrite. Stealing every single penny he can from the American taxpayers to fund corruptocrats. This puts all of this mess at the feet of the next president by design. By then, Boehner will be long gone and beyond justice. 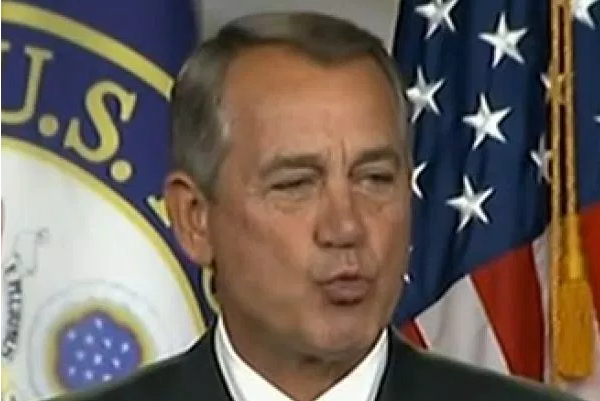 John “Bendover” Boehner, head of the House Surrender Caucus, has done it again, caving in to Obama on a two-year budget deal that increases spending and breaks the budget caps previously agreed to.

Struck just before midnight on Monday, the behind closed doors deal was done in the same kind of cronyist process that conservatives have been enraged over, and would reportedly increase the debt ceiling by at least $1.5 trillion and increase spending by at least $80 billion over the next two years, in exchange for supposed spending reductions several years down the road.

In other words, the increases are a certainty and the cuts will never happen — it’s the same games Washington plays to deceive voters into thinking they’ve done something responsible, when in fact, they haven’t.

“This is again just the umpteenth time that you have this big, big, huge deal that’ll last for two years and we were told nothing about it,” said Rep. John Fleming of Louisiana.

“I’m not excited about it at all,” said Rep. Matt Salmon, R-Ariz. “A two-year budget deal that raises the debt ceiling for basically the entire term of this presidency.”

The budget deal would suspend the current $18 trillion debt limit through March 2017, after the 2016 presidential election.

“It is past time that we do away with the harmful, draconian sequester cuts,” said leftist Senate Minority Leader Harry Reid, a Democrat who praised the deal.

The Hill[3] reports that the deal struck Monday would raise the previously agreed to budget caps — known as the “sequester” — by “a total of $112 billion in fiscal 2016 and 2017, according to a person briefed” on the secretly negotiated agreement.

Heritage Action and Club for Growth issued a joint statement about the agreement saying that it “represents the very worst of Washington.”

“This budget and debt deal is being brokered by a lame duck speaker and a lame duck president. It represents the very worst of Washington – a last minute deal that increases spending and debt under the auspices of fiscal responsibility. If this deal moves forward, it will undermine efforts to unite the party by those promising to advance serious policy reforms.”

Pro-liberty Congressman Justin Amash (R-MI) took strong exception to the deal, going off on Twitter to show his displeasure with both the process and terms of the deal. 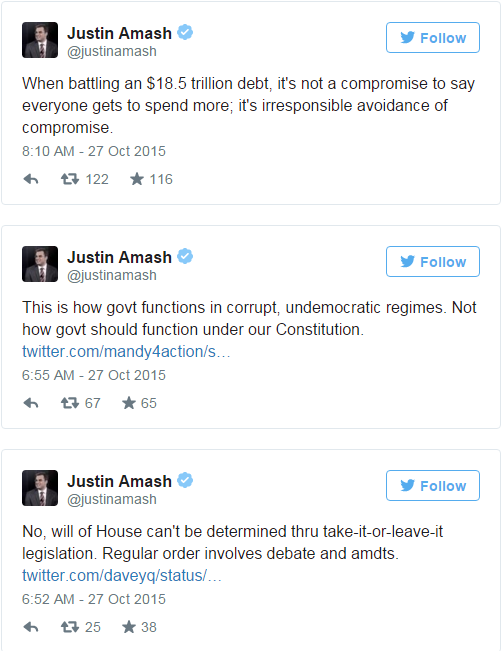 Shockingly, big government Republican and pro-amnesty Paul Ryan, the likely replacement for Boehner as the next Speaker of the House, said that the process of the budget talks “stinks.” 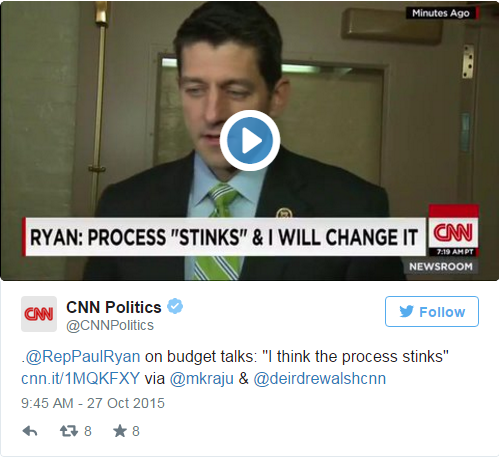 As CNS News[6] reported, federal debt has exploded under RINO John Boehner’s “leadership.” The House’s constitutional power of the purse has been virtually transferred to the Obama Regime, with federal debt increasing by almost $4 trillion since Boehner cut his first deal with Obama in 2011. That is the equivalent of almost $34,000 for every household in the United States.

Good riddance, Boehner. You will not be missed.

How does this man sleep at night? How does he live with himself? Crawling into bed with the likes of Harry Reid is beyond disgusting… it’s treason. This will fracture the party even more. Boehner’s actions are reminiscent of what happens in a third world dictatorship. No compromise, no responsibility… Even Progressive Paul Ryan thinks the whole thing stinks. Under the craven leadership of Boehner, the debt has grown $4 Trillion and yes, he is responsible for that. A strong leader in the House could have cut Obama off constitutionally long ago. Boehner should have been ousted long before this. Look at the damage he has fostered. Good riddance… don’t let the Congressional door hit you in the ass on the way out. And don’t come back.