Looks like Donald Trump was prescient when it came to 9/11.[1] In his 2000 book, “The America We Deserve,” Trump predicted that we would get hit with a monstrous terrorist attack, supposedly from Osama bin Laden. Trump was watching events going down from the Clinton Administration into Bush’s and he saw the terrorist tea leaves. They were there for anyone to see if they had actually been paying attention rather than playing politics. Joe Scarborough on Morning Joe couldn’t believe it when he heard it on his show this morning, but it is indeed true. Trump nailed it. 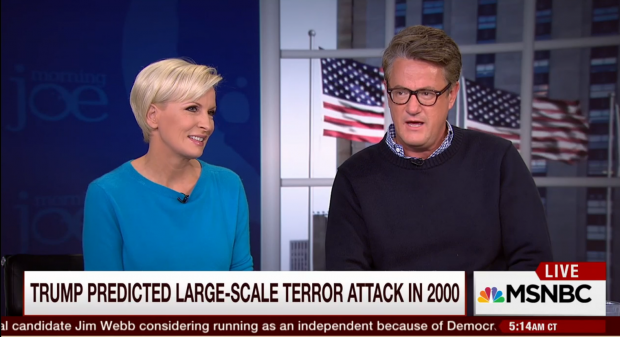 Months before the deadly 9/11 terror attacks on Sept. 11, 2001, Donald Trump made a chillingly accurate prediction about a large-scale terror attack in his 2000 book “The America We Deserve.” On Tuesday morning, a seemingly stunned “Morning Joe” panel reacted to the passage flagged by BuzzFeed[3].

Here’s what Trump wrote in the book released 19 months before 9/11:

“I really am convinced we’re in danger of the sort of terrorist attacks that will make the bombing of the Trade Center look like kids playing with firecrackers….No sensible analyst rejects this possibility, and plenty of them, like me, are not wondering if but when it will happen.”

“One day we’re told that a shadowy figure with no fixed address named Osama bin-Laden is public enemy number one, and U.S. jetfighters lay waste to his camp in Afghanistan….He escapes back under some rock, and a few news cycles later it’s on to a new enemy and new crisis.”

“Wait, wait, wait,” co-host Joe Scarborough said. “OK, hold on a second. Is this really Trump before 9/11? Have you read this? Did you make this up, Mika?”

Co-host Mika Brzezinski then mockingly asked New York Times reporter Nicholas Confessore to tell the panel how Trump’s presidential bid is “over,” which he has done before.

The MSNBC panel went on to analyze Trump’s attack on former President George W. Bush because he was commander in chief when the 9/11 attacks occurred.

Trump has pointed out[4] that 9/11 occurred on George W. Bush’s watch. Fair or not, it is true. My contention with that is that Bush had just come in to office and this was a monster of Clinton’s creation. But, Bush should have had intelligence that something was brewing. If Tenet told him it was coming and no preps were made – the whole complexion of the occurrence changes. And since the attacks on that day, it is claimed that Bush kept us safe. To an extent that is true, but he also helped throw open our borders ushering in more terrorism and and an invading force. Bush also went after Iraq and Afghanistan – both terrorist pits and they deserved to be cleaned out. However, they weren’t the head and tail of the snake. That was Iran and Saudi Arabia, and neither of those were touched or even examined. Maybe Trump, who saw clearly what was coming, would do a better job than people who had blinders on. Just sayin’.