This is so full of awesomeness[1], I can’t stand it! Heh. Phil Robertson of Duck Dynasty fame has just done a video endorsing Ted Cruz for president. Qualifications include: Godliness, does the candidate love America?, can they do the job? and would they kill a duck, put them in a pot and make a good duck gumbo? Ted Cruz is just the guy for all of the above. He even went duck hunting with Phil who says Ted is one of them now. I love it!! Twice. 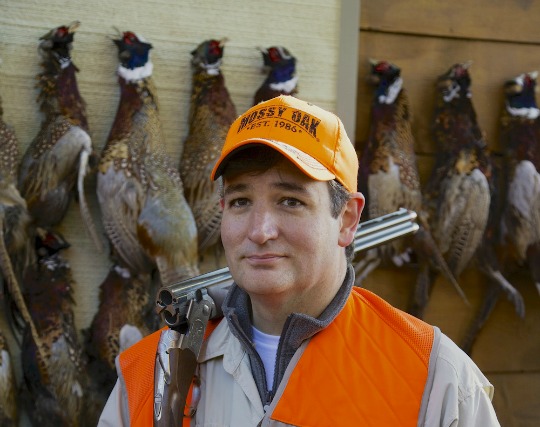 Normally I don’t care much for candidate endorsements unless they are pretty significant, and I think this one qualifies:

Now that is an endorsement I can get behind. I hope they air that in all the early states because it makes for a fantastic ad.

This should make Ted Cruz a happy, happy, happy candidate. I personally love the Robertsons. They are great people who are Christians and live their faith. “Ted Cruz is my man, I’m voting for him,” Robertson said. Robertson, the star of “Duck Dynasty,” took Cruz hunting on Monday and they sealed the deal in a duck blind. Cruz had dinner with the Robertson family Sunday night at their home in West Monroe, Louisiana. “I am thrilled to have Phil’s support for our campaign,” Cruz said. “The Robertson’s are a strong family of great Christian faith and conservative values.” The Robertson clan are also savvy business wise and they know the real deal when they see it. That’s why they support Ted Cruz just like I do. “Phil’s story of starting off with something small and working hard to achieve the American dream is inspiring,” Cruz said. “Much like my parents, and many other Americans, who started a small business and worked hard to provide for our family.” This will give the Cruz campaign an even bigger boost going into Iowa and other caucuses. Cruz Commander 2016!