This is just freaking awesome. Carly Fiorina has a spine of steel and doesn’t mince words with these political hacks. First she nails the Hildebeast for accomplishing nothing but failure. Smack! Then she moves onto Jeb Bush… he couldn’t solve his way out of a cardboard box. Slap! Then she tears into the media. Oh, baby… she let them have it. She puts them in a journalistic timeout for lack of reporting on evil mongers such as George Soros. Then she nails them for taking dirty money while screaming that the Republicans do it instead. Hypocrites much? She saved the last stab for the unions. That’s moxy. Carly Fiorina is indeed the Honey Badger of the Republican Party. Get em, Carly![1] 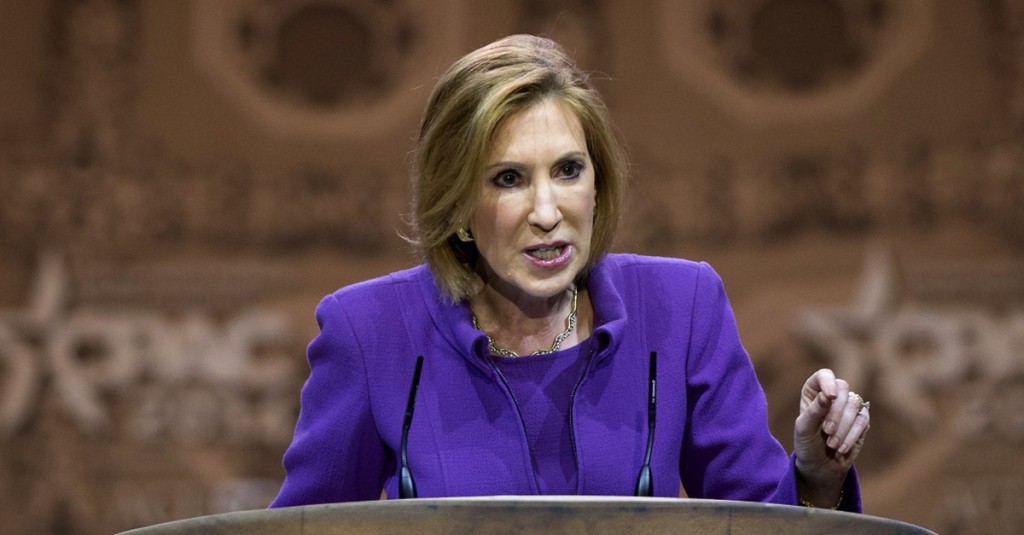 How much do we love Carly Fiorina, let us count the ways. In this post, we have three, because she went after three of our favorite targets over the weekend at a Koch Brothers summit, most likely in their underground lair…

“Mrs. Clinton’s track record is one of failure.”

“We have festering problems in Washington D.C. … the power, the weight, the complexity of government is literally crushing the potential of this nation. Given those festering problems for both Republicans and Democrats over decades, I think my question to Gov. Bush is… would be why do you think you are the Bush who can change that?”

And, of course, on the media…

I always find it fascinating the media tends to gravitate toward stories of money that funds conservative causes. I don’t see big newspaper articles about George Soros or Tom Steyer. The point is that the media doesn’t like one kind of money but is OK with another type of money. I think everyone ought to play by same sort of rules. It’s one thing for Democrats to complain about corporations getting engaged in politics, yet they never have a problem with unions in politics.”

That last part is a perfect example of how Carly Fiorina is so good. That is a common point that is made on the right, but instead of repeating it by flailing her arms around with her hair on fire just to appeal to the base, she expressed the point in a way that people from outside the base – the people not inclined to vote for us (or vote at all) that we need to vote for us – can understand and listen to.

Between Trump, Cruz and Fiorina, this first debate is going to be a barn burner. Good times. Trump takes no quarter and is blunt in a brilliant way. Cruz is a world class debater. Fiorina is a feisty scrapper who doesn’t ever let go and shakes her enemies to death with verbal ease. I’m loving this. The Left is having a meltdown over Fiorina’s candor and that she trout smacked them at a Koch Brothers summit… double points. Every single candidate the Left is running is an out and out loser. You’ve got the Hildebeast, Socialist Sanders and soon, Moronic Biden. That’s a laugh fest right there. The Republican debate will be a free-for-all and I just know who will walk away with it. Talk about the fight of the century – conservatives, get your seats now. Ready to rumble?