Politics on an egg timer.[1] It’s a shame… Carly did so well in the first debate. But she just couldn’t resist getting into the cat fight between Megyn Kelly and Donald Trump. That’s unfortunate politically. I can understand wanting to stand up for Megyn and taking umbrage at what she thought Trump was saying. Talk about thinned skinned all around. I wondered at the time if The Donald was actually referring to the monthlies of Megyn Kelly or to another reference point. I don’t think anyone ever even clarified it with him. And of course it was taken out of context[2] because people were just hanging on waiting for a gaffe. Looks like Fiorina joined in the dog pile. Considering the thousands of comments I have seen today against Megyn Kelly, that does not portend well for her candidacy. Not well at all. 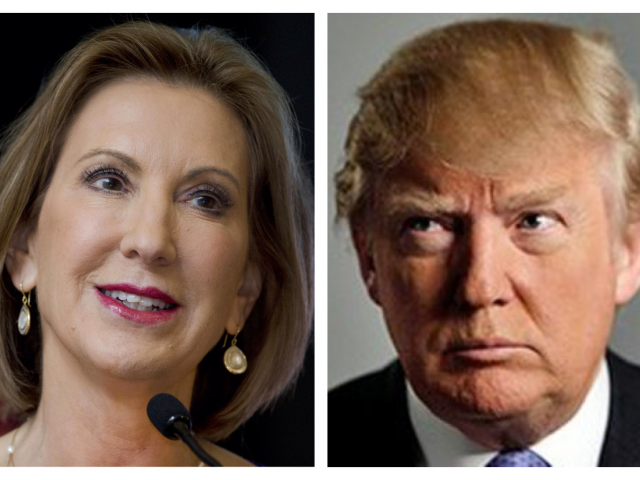 Carly Fiorina, the only female Republican presidential candidate, has spoken up in defense of Megyn Kelly, after the Fox News Channel anchor was the target of some combative criticism by Donald Trump.

As Breitbart News reported[4], Trump was unhappy with some of the questions Kelly asked him when she was moderating Thursday evening’s GOP Debate, and in an appearance on CNN Tonight Friday, said that Kelly had “blood coming out of her eyes, blood coming out of her wherever.” Many interpreted this comment as inappropriate[5] or even sexist.

Late Friday evening, Fiorina posted two tweets stating clearly her objection to Trump’s comments and support for Kelly, saying “Mr. Trump: There. Is. No. Excuse.[6]” and that she stood with Kelly[7]: 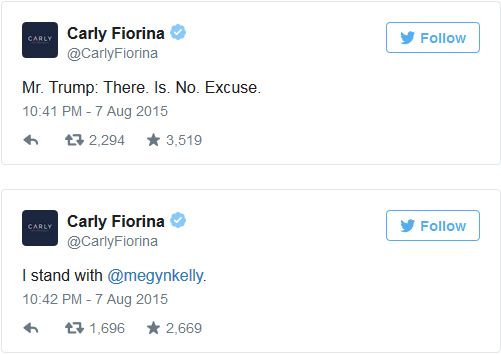 While Trump has been at the top of the national polls recently, Fiorina has been considered a longshot candidate. This week may be a turnaround for her, however, after her highly-praised performance at the GOP debate[9], where she didn’t just dominate the early “undercard” debate, but was also favorably viewed as superior to many of the top ten candidates who were invited to the prime time debate.

Sometimes staying out of a political dust up is the way to go. Case in point. Donald Trump is calling them ‘politically correct fools.’ This is now not only roiling the Republican Party, it is actively fracturing it. Not good. This is an absolute waste of time and works in the favor of the Marxists and our enemies abroad and at home. The other candidates seem to have enough sense to stay away from The Donald issue. Right now, I think everyone needs to cool off and go to their respective corners. I don’t care for spats like this – I want to have the issues addressed that are killing us as a nation, not personality wars. Carly shouldn’t have stepped into this – she’s sharp and very qualified. But Trump has his own appeal. Let’s get back to what is important and stop attacking each other. This shouldn’t be about personalities – the candidates will sink or swim on their own without cheap shots from the media or other candidates.