The Marxist media is simply giddy[1] that Ben Carson is now supposedly polling ahead of Donald Trump. They are ecstatic over the prospect. However, they should be very careful what they wish for. Carson may be soft spoken, but he is a steadfast conservative by all accounts and does not care for the media. He bluntly called CNN anchor Alisyn Camerota on the carpet over media bias and how they no longer represent the people, but have a leftist political agenda. Carson stated that if Fox News didn’t exist, the US would be Cuba. Camerota was flabbergasted and tried to insinuate that Carson was a liar. He stood firm and told her that once again, they were taking his words out of context. What he means is that since all of the mainstream media has a Marxist agenda, that Fox News is the only outlet that remotely represents Americans anymore. Fox is imperfect, but the best we have right now on the conservative side. 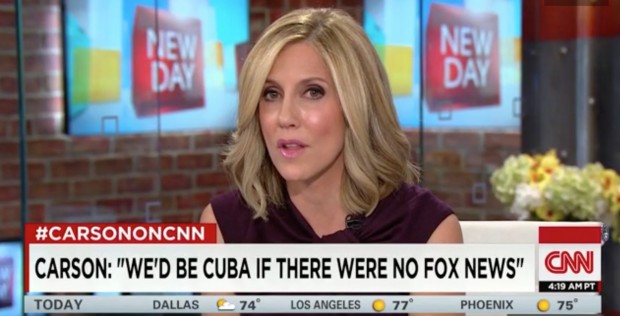 Dr. Ben Carson bluntly confronted CNN anchor Alisyn Camerota over media bias on Friday when she pressed him to clarify his comments suggesting the U.S. would be “Cuba” if Fox News didn’t exist.

“I really don’t know what you’re talking about,” Camerota said. “Fox News came to dominance in 2001. You think before 2001 the U.S. was a communist country?”

Feeling the anchor was already taking his words out of context, Carson suggested she unknowingly made his point about media bias.

Carson replied sharply, “That’s not what I said, but that’s what you guys love to do.”

When Camerota began interrupting him, Carson cut her off and told her to “listen” so he could explain the meaning of his remarks.

“What I am saying is that the general mainstream media all seems to move in a secular progressive direction,” Carson said. “You know, they would like to create a narrative that certain things are good and certain things are bad according to the way that they see them. And by being able to be the bully pulpit so to speak…you can get a lot of people to start thinking the way that you do.”

But then Fox News came along and offered an “alternative” viewpoint, Carson said.

The media feels that if Ben Carson gets the nod, he can be easily dealt with unlike Trump or Cruz. I think they are seriously underestimating the man. He nailed CNN here and he did it eloquently. Below, I have provided the entire interview, so you can see what an arrogant putz the anchor is. You will also see that Carson can handle himself quite well with the media. But I certainly understand why he prefers social media. Trump and Carson rock social media and their following there is thunderous. Makes you even wonder why we need most of these major media outlets anymore, doesn’t it?