In a level of pettiness that is almost Obamaesque, Chris Christie’s staffers deliberately created a traffic jam on a bridge to punish a politician who didn’t endorse him[1]. 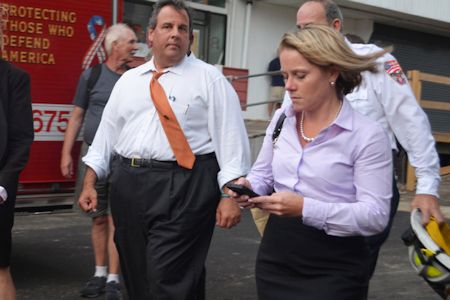 A series of e-mails and text messages disclosed Wednesday show that Christie’s deputy chief of staff and two of his top appointees at the Port Authority of New York and New Jersey closed a pair of access lanes from Fort Lee onto the George Washington Bridge into New York, causing days of gridlock and mayhem in the Fort Lee area in September.

…Christie previously said he did not believe his office had any role in the incident, but the e-mails show otherwise – illustrating the lengths to which Christie’s lieutenants went to retaliate against a local politician who would not endorse the governor during a reelection race that was never particularly close.

The e-mails, however, do not show whether Christie was involved in the lanes closure, and the governor denied knowledge of the scheme in a statement late Wednesday.

At 11 AM, Chris Christie gave a press conference about “Bridgegate” and even though I’m not a big Christie fan, I have to admit he sounded as good as he possibly could have. He didn’t just sound sincere when he apologized and took responsibility;: he fired people[3].

Heads are rolling over Bridgegate.

Gov. Chris Christie today confirmed a Post report he had fired the top aide who brazenly plotted the crippling lane closures on the George Washington Bridge.

He also forced his two-time campaign manager — who was aware of the vengeful scheme and later played a role in the damage control effort — to take his name out of the running to lead New Jersey’s Republican party.

Bridget Anne Kelly, 41, the deputy chief of staff who sent an email to longtime Christie crony and then-Port Authority official David Wildstein that read “Time for some traffic problems in Fort Lee” — was sent packing.

And Bill Stepien — who was only named as the new head the state GOP on Tuesday — also lost a lucrative contract with the Republican Governor’s Association, of which Christie is the head.
Stunning emails released Wednesday disclosed Kelly, Wildstein and Stepien all knew of the scheme to punish Fort Lee Mayor Mark Sokolich for not endorsing Christie in last year’s election.

Again, Christie sounded about as good as he could have in the press conference, but this is far from over and he made a lot of specific statements. If it turns out he knew about this, it would probably be the end of his political career. It also plays into his tough, loud mouth image in a very negative way — because with the way Christie behaves, it seems easy to imagine him being involved in something like this. Even if he had no involvement, this issue will continue to be brought up in New Jersey and it will come up again if he runs a national campaign.